With less than a week to the December 1 deadline for COVID-19 vaccine mandate for federal civil servants, figures released, yesterday, by the National Primary Health Care Development Agency (NPHCDA), shows that a paltry three per cent of the eligible population have been fully vaccinated, despite assurances by government of the availability of sufficient vaccines.

Three states had earlier made it compulsory for workers to get vaccinated, failing which they would be denied access to public spaces and religious worship centres. The states are Edo, Kaduna and Ondo. While it had been a tepid enforcement of the mandate in Kaduna and Edo since November 1, Ondo last week extended the deadline for civil servants’ vaccination to December 31, 2021.

The dismal showing also falls short of the 50 per cent target the Federal Government had earlier set for itself to vaccinate 55 million residents by the end of January 2022, which is two months away. Government had always insisted it has enough vaccines and assured of flow of high quality vaccines from many sources to meet its target

On March 6, 2021, Nigeria began its COVID-19 vaccination drive in Abuja, but nearly nine months after, a total of 6,183,844 number of eligible persons have received the first dose of COVID-19 vaccine in the country as at Tuesday, November 23, representing only 5.5 per cent of the eligible population.

Out of the number, a total of 3,456,204 have received their second dose and are fully vaccinated and this represents only 3.1 per cent of the eligible population.

Recall that the chairman of the Presidential Steering Committee on COVID-19 and Secretary to the Government of the Federation, Boss Mustapha, had announced that effective December 1, unvaccinated Federal Government workers won’t be allowed access into any public offices, as part of measures to contain the spread of the pandemic .

“All Federal Government employees are reminded that December 1 remains the deadline for all to show evidence of being vaccinated or a PCR Negative test result done 72 hours before being allowed into their offices,” he said.

The Federal Government on Monday again warned employees who love their jobs to go and get vaccinated before the deadline, insisting that its decision was in the best interest of Nigerians. The Minister of Health, Dr. Osagie Ehanire, observed that the COVID-19 vaccine mandate has become a global requirement and Nigeria cannot afford to be left behind in the fight against the pandemic.

While Ehanire said the Federal Ministry of Health is striving to attain herd immunity, “which we had calculated to be by vaccinating at least 70 per cent of our eligible population,” a paltry six per cent of eligible persons already vaccinated has demystified the insistence of vaccine mandate.

For instance, in the United States, where the mandate is also in vogue, more than 90 per cent of federal employees have had at least one COVID-19 vaccine dose, while 71 per cent of U.S. adults have been fully vaccinated, after the mandate was imposed by President Joe Biden in September.

LAWYERS are divided on the legality of the pronouncement vis-à-vis rights of citizens to privacy. While some said the Federal Government has no power to decree such orders without a legislative back up, threatening even to sue, others think it is in order and may be justified by the Quarantine Act.

In the absence of any such law, he explained, any policy statement from the government that lacks legal backing, especially when it is meant to take away guaranteed rights of citizens, is illogical, unlawful, null and void. 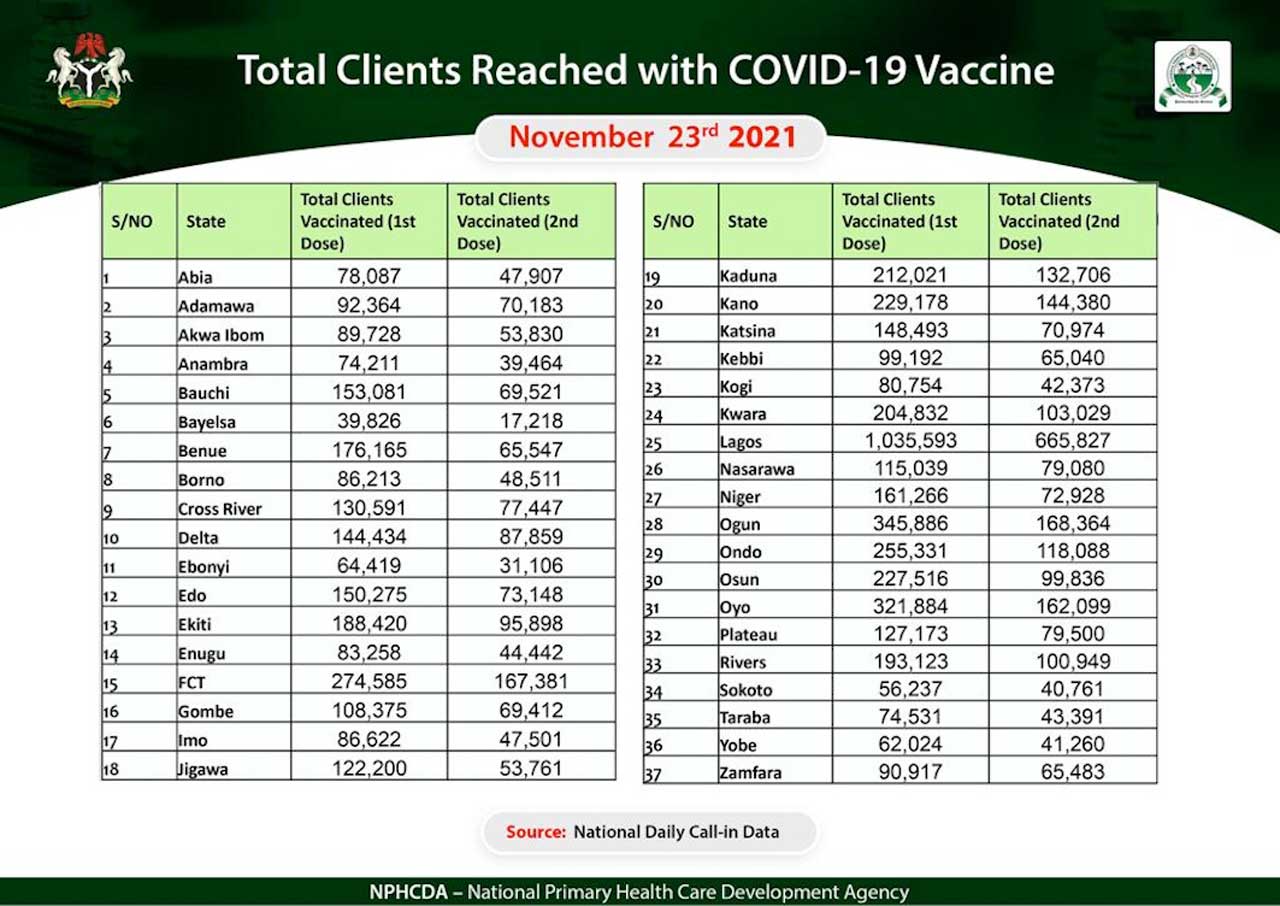 “If such exceptions that are justifiable are not provided, then it is likely that such law violates the human rights of those who are vulnerable,” he argued.

According to Ubani, the punishment of denial of access to office by the directive is a clear violation of the contractual terms of employment, and secondly a restriction to freedom of liberty and movement guaranteed under chapter 4 of the 1999 constitution, Universal Declaration of Human Rights as well as African Charter on Human and Peoples Rights.

He argued: “When these civil servants were employed, compulsory vaccinations and its attendant punishment for non compliance were not part of their terms of contract. This new policy is a rude interruption to cordial labour relationship and is against international best labour practices.”

“The truth of the matter is that there are hesitancies to the vaccinations worldwide and this is fueled by several theories and rumours. In the state of such confusion, the State must respect the rights of citizens to make informed personal decisions and not to be compulsorily rail-roaded into vaccination whose final implication is unknown, even to the scientific community.”

“It’s a matter of choice. The Constitution in Section 37 guarantees every citizen the right to private and family life, including their correspondences, discussions, etc. The section prohibits inhuman and degrading treatment, by guaranteeing the right to dignity of the human person.

“This means you cannot compel a person to take vaccination against his/her personal wish and will. Intrusion into one’s body is a matter of personal choice. It is like being forced to take a particular drug even when the taker insists he is allergic to such,” he argued.

Ozekhome charged any Nigerian forced to take the vaccine to go court for redress.

Benin-based lawyer and co-founder of FOI Counsel, President Aigbokhan, faulting the decision, stressed that the issue of compulsory vaccination in Nigeria infringes on the rights of citizens.

Forcefully compelling the people to be vaccinated against their thought, conscience and religion, he argued, is contrary to section 38 (1) of the 1999 Constitution of Nigeria, Article 17 of the African Charter on Human and People’s Rights (Ratification and Enforcement) Act, Laws of the Federation of Nigeria, 2004 and Articles 11 and 12 of the Universal Declaration of Human Rights 1948.

He therefore, declared such pronouncement by the FG as unconstitutional, illegal, unlawful and actionable.

Another human rights campaigner, Femi Falana (SAN), observed that vaccination is not new in Nigeria. “We vaccinate our children against polio and other diseases. If you want your children to go to school, they must be vaccinated.

“Children are compulsorily vaccinated against measles and poliomyelitis in Nigeria to prevent the spread. You are not compelled to be vaccinated, but if you want to mix with people in government offices you are required to show evidence of vaccination,” he stated, adding that there must be enough vaccines before the measures can be imposed on citizens.

Kano-based lawyer, Abubakar Sani, however, sees nothing wrong in the directive. According to him, the Quarantine Act is sufficient for the order.

Sani argued that the question of violation of the people’s fundamental rights does not arise because most of them can be derogated from, under Section 45 of the Constitution, in such circumstances, adding that such rights are not absolute.

Explaining the issues, the convener of Access to Justice, Joseph Otteh, said in the early 20th Century, the U.S Supreme Court upheld the right of the Federal Government, on public health grounds, to mandate vaccination against the small pox disease, and, more recently the Justices of the Court have endorsed the decision.

His words: “But it is not clear that other countries will follow the U.S decision on this point. Many countries subscribe to Bills of Rights that are of a different texture to that of the United States, and their courts may find that the right of personal autonomy may override the right of the State to tell people what they should receive in their bodies, and so courts faced with these questions will have to undertake a delicate balancing act in determining what the boundaries of governmental powers are.

“However, notwithstanding the complexities of the substantive question, there are important pre-conditions which must be satisfied before a government can even assert such a right. And that is showing a legislative mandate that enables it to prescribe and enforce a vaccine mandate.

“A law, therefore, must provide enabling powers to the government, and such a law must pass constitutional muster, i.e. it must be proximately related to meeting the exigency at hand, must not be overbroad and discriminatory, and must be directly related to the need to promote public health and safety.

“What is not clear, as of now, is the authority the government has asserted to make and enforce the no-vaccine, no-work policy. No governor has the right to arbitrarily decide on compelling its people to take the COVID-19 vaccines. They can only do so where a legislation authorises them to.

“Unless the governors can point to an enabling legislative instrument conferring such powers, the policy or directive, ab initio, is unconstitutional.”