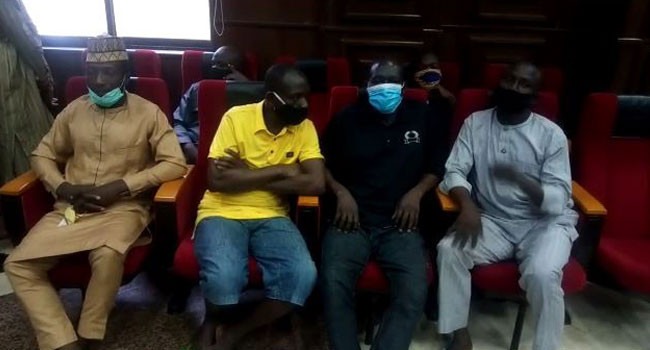 Justice Binta Nyako of the Federal High Court in Abuja has turned down the bail applications filed by suspected kidnap kingpin, Hamisu Bala aka Wadume, and six others being tried for kidnapping and related offenses.

Wadume was first arrested in Ibi, Taraba State, on August 6, 2019, by policemen from the Intelligence Response Team of the Inspector General of the Police office. He was arrested for a kidnap case in which he was said to have demanded N106m as ransom. While he was being conveyed from  Ibi to Abuja, an army of 10 soldiers, attacked the police convey carrying him to Abuja. Three police officers were killed in the attack and Wadume was set free. He was later rearrested and was charged along with others in February this year.

Today his bail application was heard in the court.

In her ruling, Justice Nyako dismissed the bail application. She granted an accelerated hearing in the case and ordered that Wadume and the six others involved in the case be immediately moved from the custody of the Special Anti-Robbery Squad of the Nigeria Police Force where they are currently being held, to the Kuje prison where their lawyers could have easy access to them.

She also ordered that the defendants be afforded access to medical facilities.

ABOUT US
Newspot Nigeria is specifically to bridge the gap between the conventional media and the growing social media, special packaging of news reports and features on socio economic and political events in Nigeria, across Africa and the rest of the world. Contact: [email protected].com
Contact us: [email protected]
FOLLOW US
© Copyright © 2020 | Developed byDominion Web
MORE STORIES