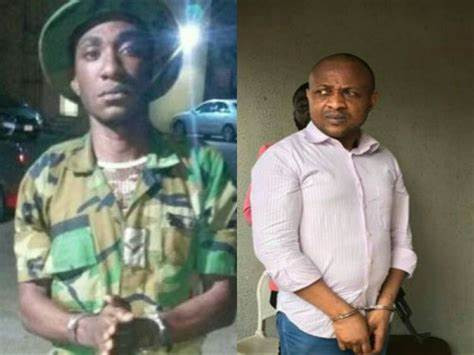 A no-case submission by one Victor Aduba, who is a co-defendant in a case involving alleged kidnap kingpin, Chukwudumeme Onwuamadike popularly known as Evans, has been dismissed by a Lagos State Special Offences Court sitting in the Ikeja area.

Aduba, a dismissed soldier of the Nigerian Army and Evans, were arraigned by the Lagos State Government on allegations of kidnapping a businessman, Sylvanus Ahamonu and collecting a $420,000 ransom from his family. They’ve both pleaded not guilty to the offence.

The dismissed soldier who asked for the case to be dismissed in his no-case submission, maintained the prosecution failed to establish a prima facie case against him.

The prosecutor, Yusuf Sule, on his part asked the court to determine whether the evidence adduced by him had sufficiently linked the defendant to the alleged offences.

Ruling on the case on Friday May 6, Justice Oluwatoyin Taiwo held that the state government had established a prima facie case linking the defendant to the crime, which makes it necessary for him to open his defense.

“I have carefully considered the submissions of the prosecution and the defence.

“Evidence of the prosecution shows that it has sufficiently proven a prima facie case against the defendant and the defendant has a case to answer.

“I hereby dismiss the application of the defence, and order that the defendant should open his defence.”