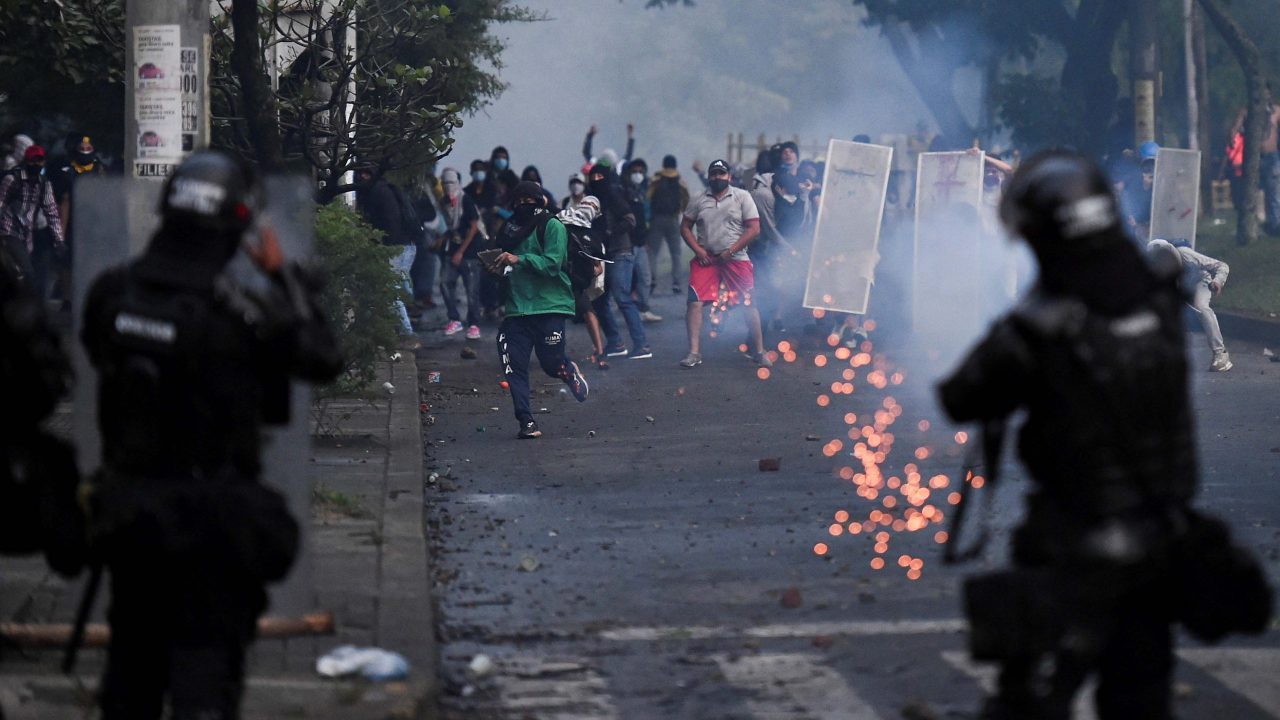 Riot police officers fire tear gas to demonstrators during clashes following a protest against a tax reform bill launched by President Ivan Duque, in Cali, Colombia, on April 30, 2021. – A tax reform project in Colombia added fuel to the discontent that exploded in the streets against President Ivan Duque. Expanding the taxpayer base, raising taxes, reducing exemptions and increasing VAT on some products are initiatives that are debated with some scepticism in the Congress. The government aims to raise about 6,3 billion dollars between 2022 and 2031 to ease the pocket of the fourth Latin American economy, hit by the COVID-19 pandemic. (Photo by Luis ROBAYO / AFP)

Colombian President Ivan Duque caved in Friday to widespread anger and said he would overhaul a proposed tax reform that many said would leave them poorer during the pandemic.

Duque announced he was shelving clauses that would lower the income tax threshold to broaden the tax base and raise value-added taxes on goods and services.

He acted two days after tens of thousands of Colombians took to the streets across the country to denounce the proposed tax changes.

They were rejected across the board by opposition parties, unions, students and civil society groups that complained that the reforms came at the worst possible time and were particularly harmful to the middle class.

Even some in Duque’s party opposed his plan.

“I have given very clear instructions to the finance ministry for it to … compose a new draft with congress,” Duque said.

The measures had meant to raise some $6.3 billion over 10 years for Colombia, which saw GDP drop 6.8 percent in 2020 — its worst performance in half a century.

Colombia, where almost one in five people are unemployed and the minimum wage is the equivalent of $248 per month, is battling a deadly new wave of Covid-19.

At 2.8 million, the country of 50 million inhabitants has the third-highest number of known coronavirus infections in Latin America, behind Brazil and Argentina.

While Duque has sought to portray the tax reform as a tool to mitigate the economic crisis unleashed by the pandemic, the initiative faced many obstacles in a legislature where the ruling party has no outright majority.