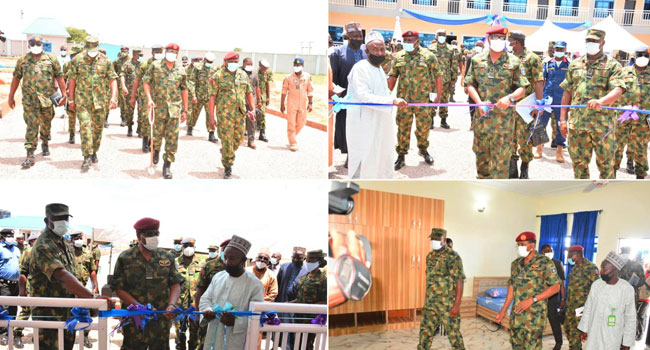 The Chief of the Air Staff (CAS), Air Marshal Sadique Abubakar, has commended personnel of the 271 Nigerian Air Force Detachment (271 NAF Det) Birnin Gwari, Kaduna State for the recent successes recorded against armed bandits and other criminal elements within their Area of Responsibility (AOR), including the neutralization of several armed bandits at Pole Waya along the Kaduna-Birnin Gwari Road the preceding night.

The CAS however tasked them not to relent in their efforts but sustain the momentum of operations in order to restore peace to the affected areas, for inhabitants go about their normal businesses without fear.

“I am happy to note that this Unit neutralized some bandits yesterday while carrying out its constitutionally assigned task. We must continue to fight until our beloved citizens are able to go about their daily activities and live freely.

“It is our obligation to professionally perform our roles to protect our dear Country from both terrorism and armed banditry”, the CAS said.

Air Marshal Abubakar gave the commendation and charge today, 8 July 2020, while on an operational visit to Birnin Gwari where he also commissioned the newly constructed internal road network as well as a block of 20 x one bedroom transit accommodation for airmen, which is expected to pave way for the deployment of additional personnel to beef up the manpower disposition of the Unit.

Speaking further, Air Marshal Abubakar noted that the current NAF leadership has not only consistently sought to evolve strategies that would enable the Service adequately project air power to effectively and efficiently deal with prevalent security threats, but has also accorded personnel welfare utmost priority.

This, he said, was in recognition of the pivotal role that the welfare of the human component of any security architecture plays in ensuring operational efficiency. The CAS remarked that the commissioning ceremony symbolized yet another demonstration of his commitment towards enhancing human capacity for efficient performance.

While noting that the NAF’s air offensives against bandits and other criminals in on-going internal security operations in Niger, Kaduna, Zamfara, Katsina and Sokoto States had contributed greatly to the achievements of the Armed Forces of Nigeria, Air Marshal Abubakar re-emphasized that there was no time to relent but rather to intensify operations to ensure total defeat of the bandits.

He said the 271 NAF Det Birnin Gwari, working in concert with sister Services and other security agencies, would continue to play a crucial role in this regard to arrest the dynamic security challenges within its AOR.

The CAS, therefore, commended the Air Officer Commanding Special Operations Command (AOC SOC), Air Vice Marshal (AVM) Charles Ohwo, the Commander 271 NAF Det, Wing Commander Steven Sekegor, as well as the officers and men of the Detachment for their efforts, whilst urging them to justify the resources being expended by the Government by working round the clock to ensure the security of Nigeria and Nigerians.

He also commended the NAF Directorate of Works for the effective execution of virtually all the infrastructural projects in the Detachment, including the new residential accommodations and road network, through direct labour; noting that 30 additional Special Forces personnel had already been posted to the Unit and would soon report to further boost the operations of the detachment.

The CAS further reiterated the commitment of the Service towards ensuring that accommodation problems are eradicated. He however urged the beneficiaries to utilize the new facilities with a high sense of responsibility whilst endeavoring to maintain the highest level of professionalism and regimentation in their daily conduct.

While expressing his gratitude to the President, Commander-in-Chief of the Armed Forces, President Muhammadu Buhari, for his unending support to the Service towards the achievement of its statutory mandates, Air Marshal Abubakar seized the opportunity to assure all Nigerians of the NAF’s unwavering commitment to ensuring a safer and more secure Nigeria.

Speaking earlier, the AOC SOC expressed appreciation to the CAS for his relentless efforts at ensuring the provision of conducive living and working environments for NAF personnel. He said this had greatly enhanced personnel performance, morale, and service delivery. He assured the CAS of the dedication and unalloyed commitment of all officers, airmen, and airwomen of Units under the SOC to dealing decisively with all criminal elements within the Command’s AOR.

Before departing Birnin Gwari, the CAS, who was accompanied on the visit by the Chief of Training and Operations, AVM James Gwani, and the Chief of Logistics, AVM Mohammed Yakubu, the AOC Air Training Command, AVM Musa Mukhtar, as well as other senior officers from the NAF Headquarters, held a brief closed-door meeting with the Commander 271 NAF Det as well as the Air Component Commanders for Operations GAMA AIKI and THUNDER STRIKE.

Dignitaries at the commissioning ceremony included the Representative of the Chairman of Birnin Gwari Local Government Area as well as heads of paramilitary and security agencies in Birnin Gwari.

Mercy Eke made Herself the Happiest Birthday Girl with this Lavish...

“Real men don’t pester women, they walk away when she says...