Elder Statesman and former federal commissioner for information, Chief Edwin Clark, says it is unacceptable for the Federal Government to attempt an override of state governments on the issue of open grazing.

President Buhari in a recent interview gave a positive nod to a First Republic idea that would see the return of cattle grazing routes allowing herdsmen trail designated paths across the country.

This move did not sit well with many Nigerians, with some claiming that the insistence on open grazing points to a hidden agenda.

In his reaction to this development, Clark called on President Buhari to regard himself as the President of Nigeria and not as a leader of the Fulani tribe.

READ ALSO: VIDEO: My People Say They Have No Land For Ranching – Umahi 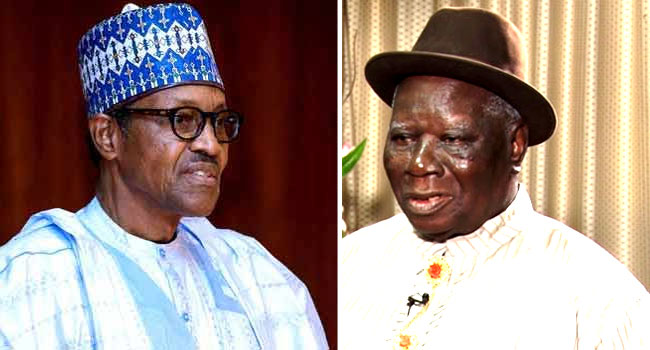 “The decision on open grazing and other decisions taken on national interest by the 17 Southern governors received the full support of the people of Southern Nigeria, particularly the leadership of Ohanaeze Ndigbo of the South-East, PANDEF of the South-South and the Afenifere of the South-West.

“The President has no power or authority to impose open grazing on state governments. Such illegal action which is a breach of the 1999 Constitution will not be accepted and will be legally resisted at all costs.

“Therefore, any law banning open grazing by state governments is not only legal and binding but is unchallengeable and binding on any person or group of persons, including the President of the Federal Republic of Nigeria

“We will no longer tolerate hate and divisive statements targeted at deriding and insulting others, from these Fulani’s who believe Nigeria is exclusively theirs and other Nigerians are their subjects and not their fellow citizens,” Chief Clark briefed newsmen.

While noting that the people of the Niger Delta have watched with patience the reckless and irresponsible utterances of some groups who have over the years threatened other Nigerians over grazing routes, the elder statesman warned the Federal Government and the Miyetti Allah Cattle Breeders Association (MACBAN) against conduct and utterances capable of escalating the crisis in the country.

At least 40 dead after three bus accidents in two days...