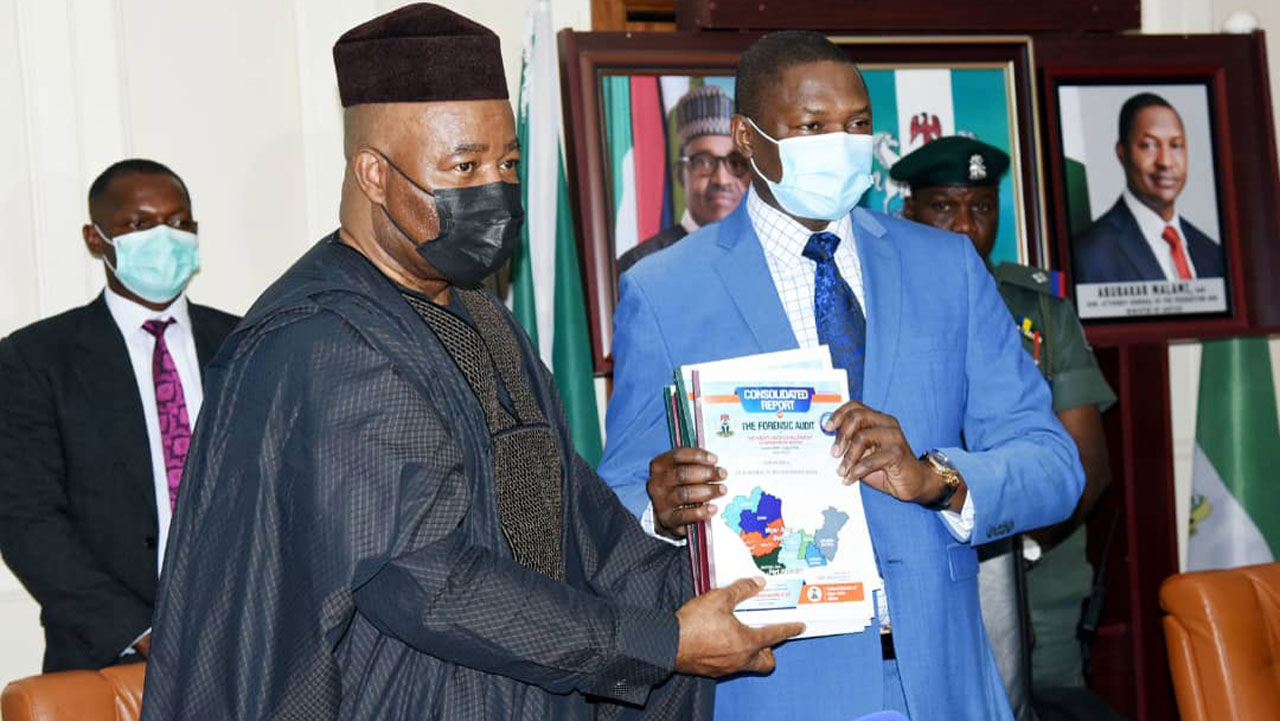 This followed as Attorney General of the Federation (AGF) and Minister of Justice, Abubakar Malami, received the forensic audit report from Minister of Niger Delta Affairs, Godswill Akpabio, on behalf of the president yesterday.

While receiving the report, the president said everyone who would be indicted for shady deals in the NDDC would not be spared, no matter how highly placed adding: “Everyone will be made to account for his or her own deed. No one will be spared.”

He expressed dismay that the commission maintained 362 bank accounts as conduit pipe through which funds were used to pay contractors for either unexecuted or abandoned projects, describing it as unprecedented.

The Guardian recalled that the President ordered forensic audit of the commission’s activities from inception to August 2019 in response to the yearnings of the Niger Delta region to reposition the NDDC for the effective service delivery.

Buhari said: “The Federal Government will apply the law to remedy the deficiencies outlined in the audit report as appropriate. This will include but not limited to initiation of criminal investigations, prosecution, recovery of funds not properly utilised for the purposes they were meant, among others.

“In all actions, legal due processes will strictly be followed.”

He also said the report would be forwarded to the Federal Ministry of Justice for a legal review and relevant Ministries, Departments and Agencies (MDAs) of government would be engaged to do justice to the findings accordingly.

The President further stated that over 13, 777 projects were substantially compromised in the region, adding that the Federal Government was also concerned about the 362 bank accounts and lack of proper reconciliation of the accounts.

“It is in the broader context of the foregoing that I recently signed the Petroleum Industry Act (PIA), which has been a contentious issue over the years for successive governments into law, to ensure prudence and accountability in the petroleum sector and to give a sense of participation and ownership to the host communities,” he said.

Speaking, Akpabio disclosed that the auditors have concluded examination and documentation of 13,777 contracts for projects and programmes awarded to contractors and consultants in all Niger Delta States from 2001 to August 2019, at a total value of N3.274 trillion.

MEANWHILE, the Pan Niger Delta Forum (PANDEF) expressed indifference over the content of the report, stating that it has been vindicated that funds have been mismanaged and warned that culprits in the alleged 13, 777 compromised project should not be spared.

Its National Publicity Secretary, Ken Robinson, said it was commendable that the report had been submitted to the presidency, but that the forum would carry out a thorough study of the report to know if some content would be unacceptable by the region.

Also, the National Youths Council of Nigeria (NYCN) and civil society groups (CSOs) have canvassed immediate implementation of recommendations of the forensic report.

Speaking at a joint media briefing in Abuja, they urged President Buhari to ignore all distractions that might be sponsored against full implementation of the report, in the interest of the Niger Delta region and Nigerians.

Led by Solomon Adodo, the groups expressed hope that the era of corruption in the form of extensive contract frauds, procurement law infractions, non-budgetary and extra-budgetary spending, audit violations, cronyism, fiscal recklessness and flagrant disregard for procedure, as well as other financial malpractices should end with the implementation of the audit report.