President Muhammadu Buhari has asked Nigerians to be patient because the price of rice in the Nigerian market is expected to fall as the country recently launched 13 pyramids of rice paddy.

The President on Tuesday in Abuja said the growing food production in the country, especially expansion in rice farming, will eventually bring down prices of food, making it more affordable for all.

He spoke at the official commissioning ceremony of the Central Bank of Nigeria (CBN)/Rice Farmers Association of Nigeria (RIFAN) Rice Paddy Pyramids at the Abuja International Trade Fair Complex.

“I am aware that the bags of paddy will be moving straight from here to rice milling plants across Nigeria, which lead to the release of processed rice to the markets by the rice millers. The measure will aid our efforts at reducing the price of rice in Nigeria.

“Before this administration launched the ABP, there were only 15 standard Rice mills in Nigeria. As at today, we have over 50 Standard and integrated Rice mills creating jobs and reducing unemployment.  We expect additional significant output when two new mills are started in Lagos and Katsina,’’ he said. 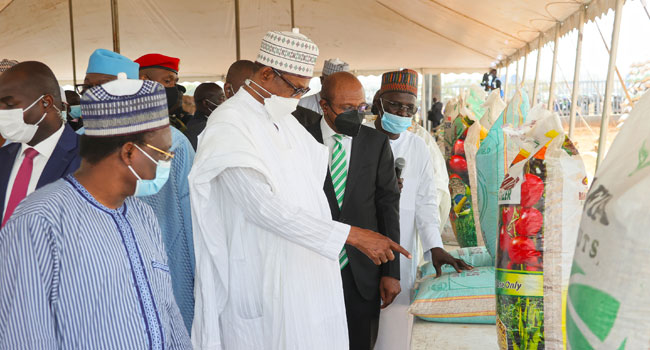 According to President Buhari, the country can boast of producing over 7.5 million metric tons of rice annually, with over four million farmers benefiting from the Anchor Borrowers Programme.

“The significance of today’s occasion can be better understood by looking at the various economic strides the administration has achieved through agriculture.

“When we assumed the reins of leadership of this country in 2015, the administration identified the Anchor Borrowers’ Programme as an essential policy instrument for achieving economic diversification through agriculture.” 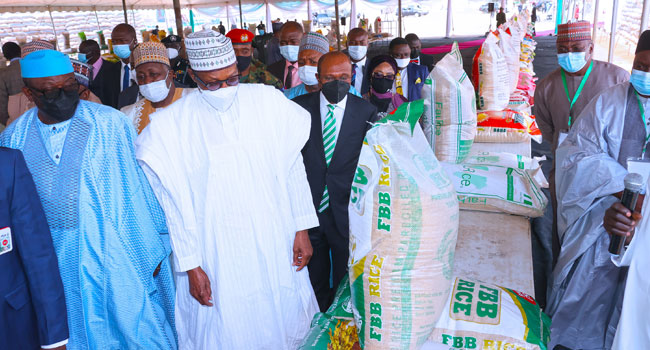 “Fellow Nigerians, our gathering here today, is no doubt a testament to the fact that the Anchor Borrowers’ Programme is working. Indeed, these sky-high pyramids which we are gathered here to commission are part of our commitment to achieving national food security and economic diversification through home-grown policies targeted at securing food for all Nigerians.

“As a critical policy of the government, the Anchor Borrowers’ Programme is expected to catalyze the agricultural productive base of the nation, which is a major part of our economic plan to uplift the economy, create jobs, reduce reliance on imported food and industrial raw materials, and conserve foreign exchange.

“In the implementation of the Programme, adoption of high-yielding seedlings, quality inputs and best farming practices were essential features.

“For instance, the improved rice seedlings have helped to ensure our achievement of rice sufficiency, as they are disease-resistant and have an average yield of about 5 metric tonnes per hectare, compared with the traditional national average of 1.5 metric tonnes.

“This has resulted in bridging our rice consumption gap, a significant reduction in rice imports, and saved us foreign exchange,’’ he added.

President Buhari commended the Central Bank of Nigeria for its efforts at resuscitating the Nigerian Commodity Exchange following approval to do so.

This, he said, had been done in the hope that farmers can have ready buyers of their produce, thereby resolving the current logistical challenge of moving their produce from farm to markets. 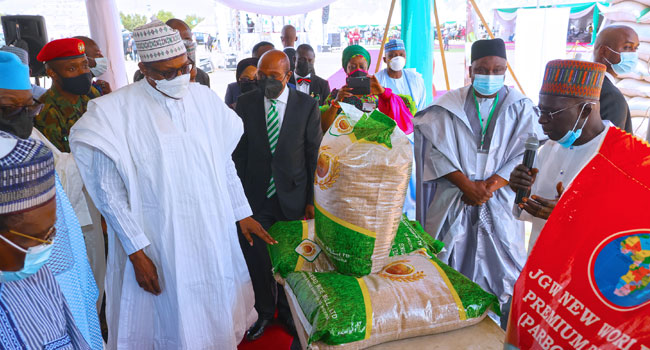 “Let me also commend the Governor and staff of the Central Bank of Nigeria, as well as the leadership of the Rice Farmers Association of Nigeria for the successful delivery of these pyramids, which hopefully is just the first of many that will be unveiled this year across Nigeria,’’ the President added.

According to the CBN Governor, taking a cue from the success of rice production, the financial regulatory body had commenced the wheat value chain, which produces five to six million tonnes each year.

President of RIFAN, Alhaji Aminu Goronyo, said more than 99 per cent of the paddy rice for the year was already with farmers across the nation, while the bags in 13 pyramids will be sold to further ease and augment production.