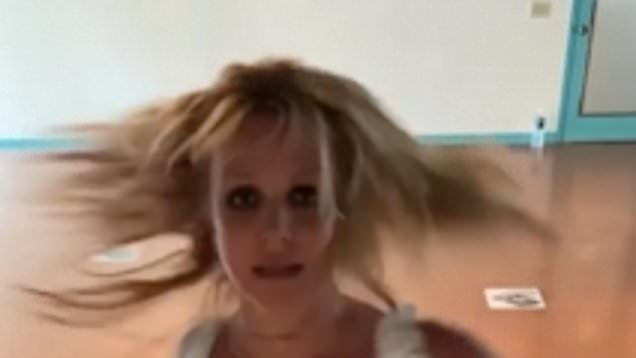 Britney Spears posted a carefree video online of herself dancing amid reports that her father Jamie Spears has agreed to step down from her conservatorship.

The popstar has been locked in a legal battle to have Jamie removed from the role, which has been in place since 2008, putting him in charge of her personal and financial affairs.

On Thursday TMZ reported he voluntarily filed papers as Los Angeles Superior Court to remove himself as conservator.

Britney took to Instagram to proudly show off her freestyle dancing in a video that was taken while she was on holiday in Maui, speaking about feeling ‘freedom’ while bringing out her best moves.

‘You can see the last dance in red top I’m very hesitant when dancing ?? but letting go is freedom!!!!’ she wrote.

‘I’m not sure exactly why I’m being so cautious…it might be my left foot that was broken talking to me ???? !!!!

‘You can tell when I turn but hopefully I will let go thoroughly and follow through soon ?️ !!!!’

She later posted a cryptic illustration of a woman with flowers in her hair.

The Toxic singer previously broke her foot in February 2020 as she performed an energetic routine.

The 39-year-old was accompanied by boyfriend Sam Asghari in hospital as she sported a cast on her foot with the word ‘STRONGER’, also the title of one of her hits, written across it.

According to court documents seen by TMZ, Jamie’s lawyer states that he ‘does not believe that a public battle with his daughter over his continuing service as her conservator would be in her best interests.’

It adds that he will ‘work with the Court and his daughter’s new attorney’ to handover to a new conservator.

Earlier this month Britney spoke directly to fans about the legal battle in a rare video message, saying that ‘things are way better than what I ever anticipated’.

Cynthia Morgan abandons her dream to get a Grammy as she becomes a prophetess.

Why I stripped naked to pray for Tinubu’s victory – Actor, Olaiya Igwe