A bride has sadly been shot dead at her own wedding ceremony after a stray bullet from celebratory gunfire hit her in the head.

Mahvash Leghaei, 24, got married at Firuzabad in Iran when a guest, who is believed to be a cousin of the groom, fired his unlicensed high-powered hunting rifle. The bullet reportedly went straight through her skull and also injured two male guests at the event.

Police spokesman Colonel Mehdi Jokar said: ‘We had an emergency call of a shooting at a wedding hall in Firuzabad city and officers were dispatched immediately.

‘The officers discovered that somebody had fired shots with a hunting rifle as part of the local nomad tradition, but unfortunately because of the crowds and the person’s poor control of the weapon, he managed to shoot three people, two men and the bride. 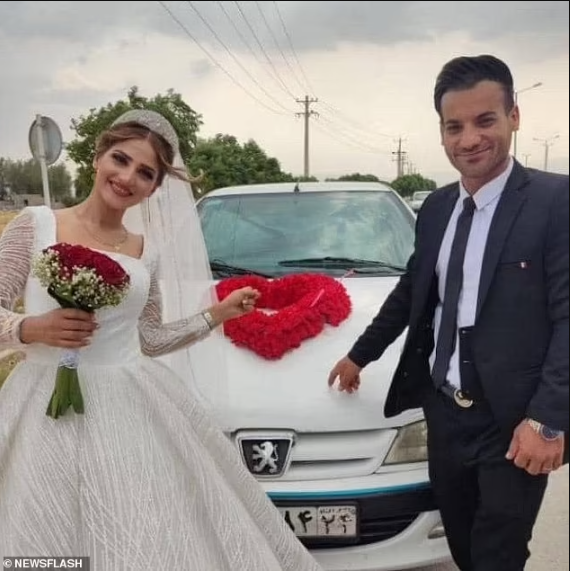 ‘The shooter then fled the area but police located the man still carrying the unlicensed hunting rifle that had been fired at the wedding.’

According to initial reports two bullets were fired, the first without incident, but the second hitting the bride in the head, passing through her brain and hitting the two other guests.

The police spokesman said the bride was placed in a coma and later died but the two others who had been shot were not seriously injured.

The shooter was identified as a 36-year-old who was not named but was reportedly a cousin of the groom.

The police spokesman added: ‘Naturally any disturbance of public order like this crosses the red line with the police need to act, and people need to know that to create a safe community shooting is banned at weddings.

‘We will take tough action against anybody found to be breaking this rule.’

The victim’s family said her organs were donated and they have helped three people.

The custom of firing a gun at weddings is illegal but still common in the Middle East.

Insecurity Has Reached the Stage that APC Senators Can no Longer...

Insecurity Has Reached the Stage that APC Senators Can no Longer...