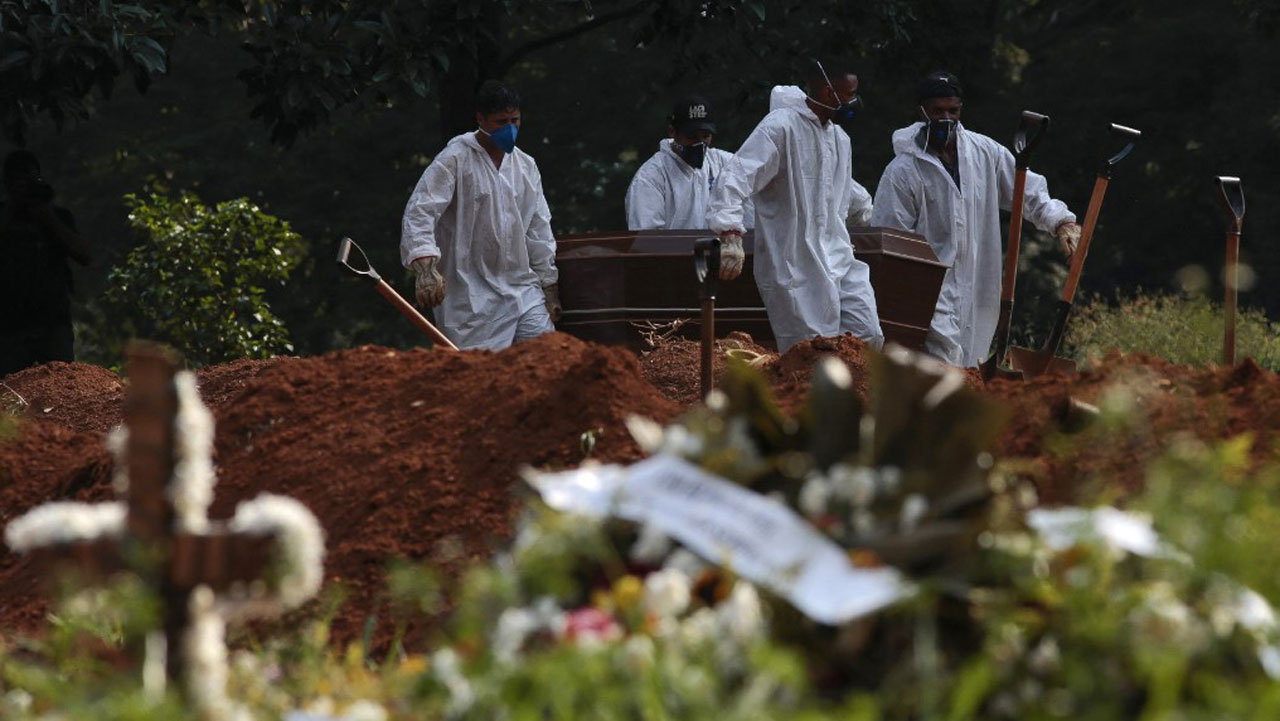 Cemetery workers carry the coffin of a victim of COVID-19 at the Vila Formosa cemetery in Sao Paulo, Brazil, on March 23, 2021. Brazil’s daily Covid-19 death toll soared past 3,000 for the first time Tuesday as the hard-hit country struggled to contain a surge of cases that has pushed many hospitals to breaking point. Miguel SCHINCARIOL / AFP

Brazil’s daily Covid-19 death toll soared past 3,000 for the first time Tuesday as the hard-hit country struggled to contain a surge of cases that has pushed many hospitals to breaking point.

The health ministry registered a record 3,251 deaths in the past 24 hours, bringing Brazil’s overall death toll to nearly 299,000 — second only to the United States.

The latest bleak milestone came on the same day President Jair Bolsonaro installed his fourth health minister of the pandemic, facing pressure to change tack after downplaying the virus and flouting expert advice on containing it.

Cardiologist Marcelo Queiroga, 55, took over the post from Eduardo Pazuello, an army general with no medical experience whose handling of Covid-19 was widely criticized.

Pazuello is notably facing investigation for failing to ensure oxygen supplies to the northern city of Manaus, where there were horrific scenes in January of Covid-19 patients suffocating to death when hospitals ran out.

Bolsonaro’s first two health ministers, Doctors Luiz Henrique Mandetta and Nelson Teich, both fell out with the president over his defiance of expert advice on containing the virus.

Hospitals overflowing
Brazil’s average daily Covid-19 death toll has more than tripled since the start of the year, to 2,364, currently the highest worldwide.

Experts say the explosion is being fueled by a local variant of the virus that is suspected to be more contagious.

In a new warning sign, the prosecutor general’s office said Tuesday the health ministry had told it that medical oxygen supplies were at “worrying” levels in six of Brazil’s 27 states.

One of Brazil’s main oxygen suppliers, the company White Martins, said it was racing to keep up with an “exponential increase” in demand of up to 300 percent in some regions, prosecutors said in a statement.

Sao Paulo, Brazil’s most populous state and industrial hub, said Monday it would set up an emergency oxygen plant within 10 days in partnership with brewing company Ambev to supply overstretched hospitals.

The state, population 46 million, has been hit hard by the new wave of Covid-19.

Globo TV reported last week that at least 135 people had died in Sao Paulo waiting in line for intensive care beds with confirmed or suspected cases of the virus.

The six states whose oxygen supplies are the most critical are Acre and Rondonia in the northwest, Mato Grosso in the center-west, Amapa in the north, and Ceara and Rio Grande do Norte in the northeast, prosecutors said.

Brazil has now registered 12.1 million confirmed Covid-19 infections, which is also the second-highest worldwide, after the United States.