The body of an unidentified man has been discovered in the landing gear compartment of a plane that flew into Amsterdam, the Netherlands from Lagos Nigeria.

It was gathered by Newspot that the KLM plane arrived in the Netherlands from Nigeria on Monday, April 19 through Amsterdam’s Schiphol Airport.

The body was said to have been discovered by the airport technical staff with initial reports suggesting the yet-to-be-identified man was killed by freezing temperatures during the flight.

Dutch security authorities have confirmed the body and have also commenced investigations into the man’s identity and cause of death. 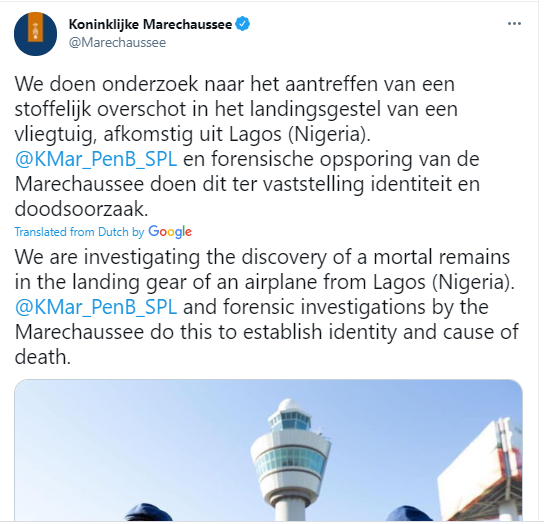 “We are investigating the discovery of a body in the landing gear of an airplane that arrived from Lagos (Nigeria),” , Royal Military Police tweeted on Tuesday, adding that the Schiphol airport police unit and forensic investigators were working on establishing the person’s identity and cause of death.

Furthermore, a spokesperson for the Royal Netherlands Marechaussee was quoted to have told Dutch newspaper Algemeen Dagblad that: “The man had holed up in the wheel arch of the plane. The low temperatures have presumably been fatal to him during the flight.”

Meanwhile, the Chief Imam of Kwangwami Jumuat mosque in Kwangwami community in Zurmi Local Government Area of Zamfara State, Alhaji Liman Auwalu, and one villager have been killed during an attack on the community by bandits.

Villagers that spoke on the incident, noted that the bandits destroyed many farmlands and made away with cattle and other valuable properties.

An eyewitness identified as Ibrahim Kwangwami, disclosed that the bandits invade the community in their large numbers on motorcycles and started shooting sporadically.

The Chief Imam during the attack was hit by a stray bullet while the villager identified as Hamisu Bako was shot dead at his farm.

The spokesman of the command, SP Mohammed Shehu, while confirming the incident, said armed police tactical operatives have been deployed to the area and efforts to arrest the bandits are ongoing.

Mbaka Who Prophesied Jonathan’s Defeat To Buhari Should Not Be Attacked...