Home Entertainment #BNCreativesCorner: Through His Works, Kwame Akoto-Bamfo is Creating a Repository of Our...
Facebook
Twitter
WhatsApp
Telegram
Email 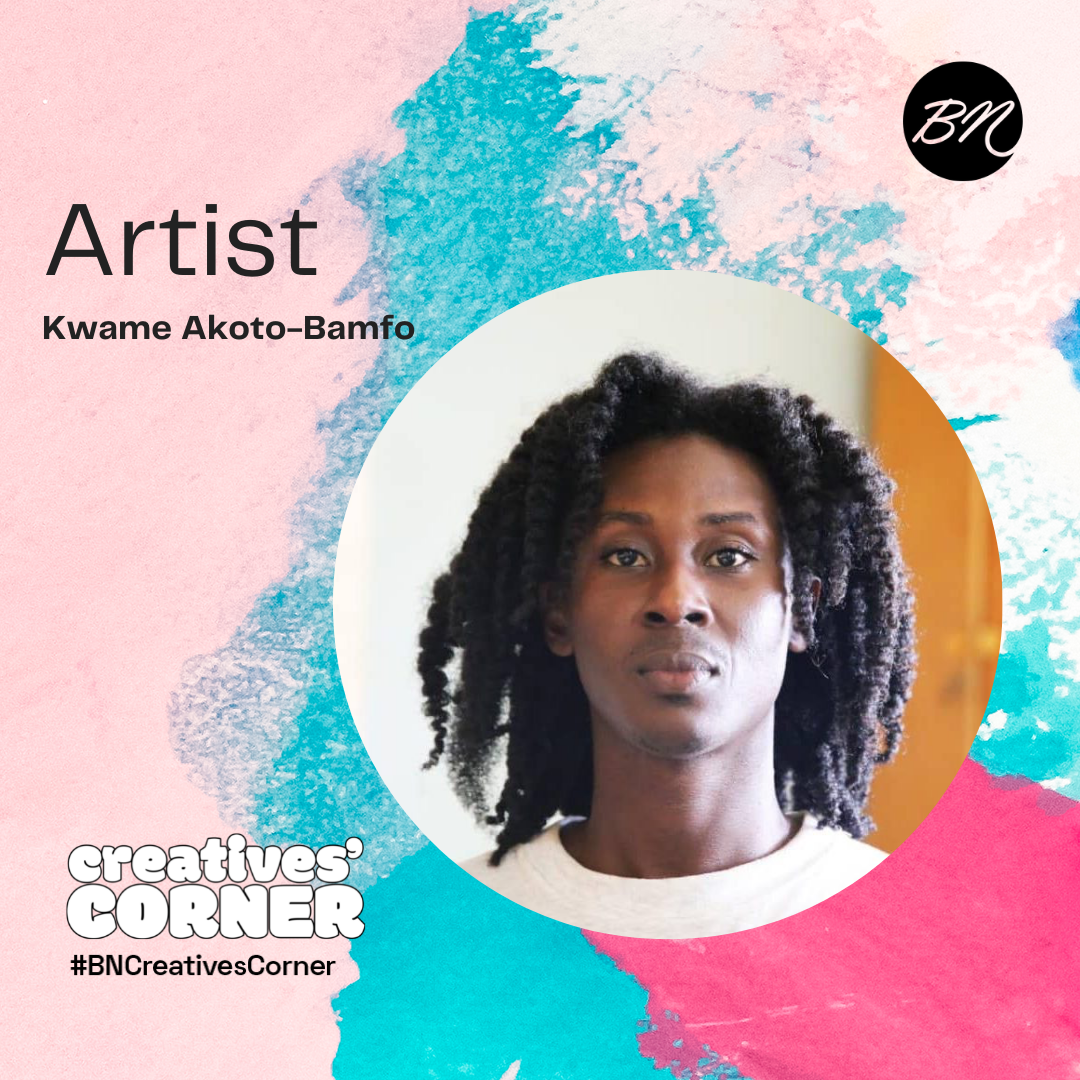 The richness of the African culture and people is one that is blotted with the horror of the transatlantic slave trade. So atrocious and barbaric were the events that tales of it are hardly told or taught to black children, and its actions are watered down to make it trade-like, rather than what it truly was – the enslavement of majorly Africans.

As a Ghanaian who is interested and inspired by Ghanaian and African culture, Kwame Akoto-Bamfo is a living witness to this knowledge that is being lost to time, and through his works, he is creating a repository of our history and heritage in a language that everyone would understand. He is also hoping that through education and through emancipation, he can contribute to the healing the continent deserves.

Kwame Akoto-Bamfo is a multi-eclecticism artist – someone who can do almost everything in the art space. Usually, people say “I am a sculptor,” or “this person is a painter,” but when you look closer, you find out that aside from the painting, they’re doing sculpture, music, animation, and so many other creative activities within the art field, and sometimes even outside the artist’s or the creative genre. It is the same with Kwame who trained in combining all of this. Although he is known for his sculptures, Kwame does 3D modelling, animation, creative direction, cobblestone, welding, designing and music. He is also an art professor. Like many artists, art chose Kwame from a very tender age.

I started very little; my mother says I was age 3. Around age 2 and the half to 3, I had already started sculpting – you know, making shapes and images. So I started really early. I also picked up performances, and around age five, I started taking my martial art training as well.

So by the time I was 18, 19, I was teaching professionally. And then I was also directing a few plays and drama. I made it to university at 19. And after graduation, I started teaching, even while I was in school, I think I was teaching part time. So I’ve had a long history in academia.

I started my organisation right after my degree, but it was officially registered later. This evolved into becoming the founder of the Nkyinkyim Museum in Ghana, and becoming a contributor to other museums in Europe and America.

The Nkyinkyim Museum is one of the biggest outdoor museums in Ghana. It has an assemblage of beautifully sculpted pieces capturing the stories of the slave trade and promoting Africanism and the African heritage.

Because of the media attention my works on enslavement get, people think that’s all I work on. But should you ever visit our museum, you’d see a much more holistic story, of which African enslavement is only a section of. 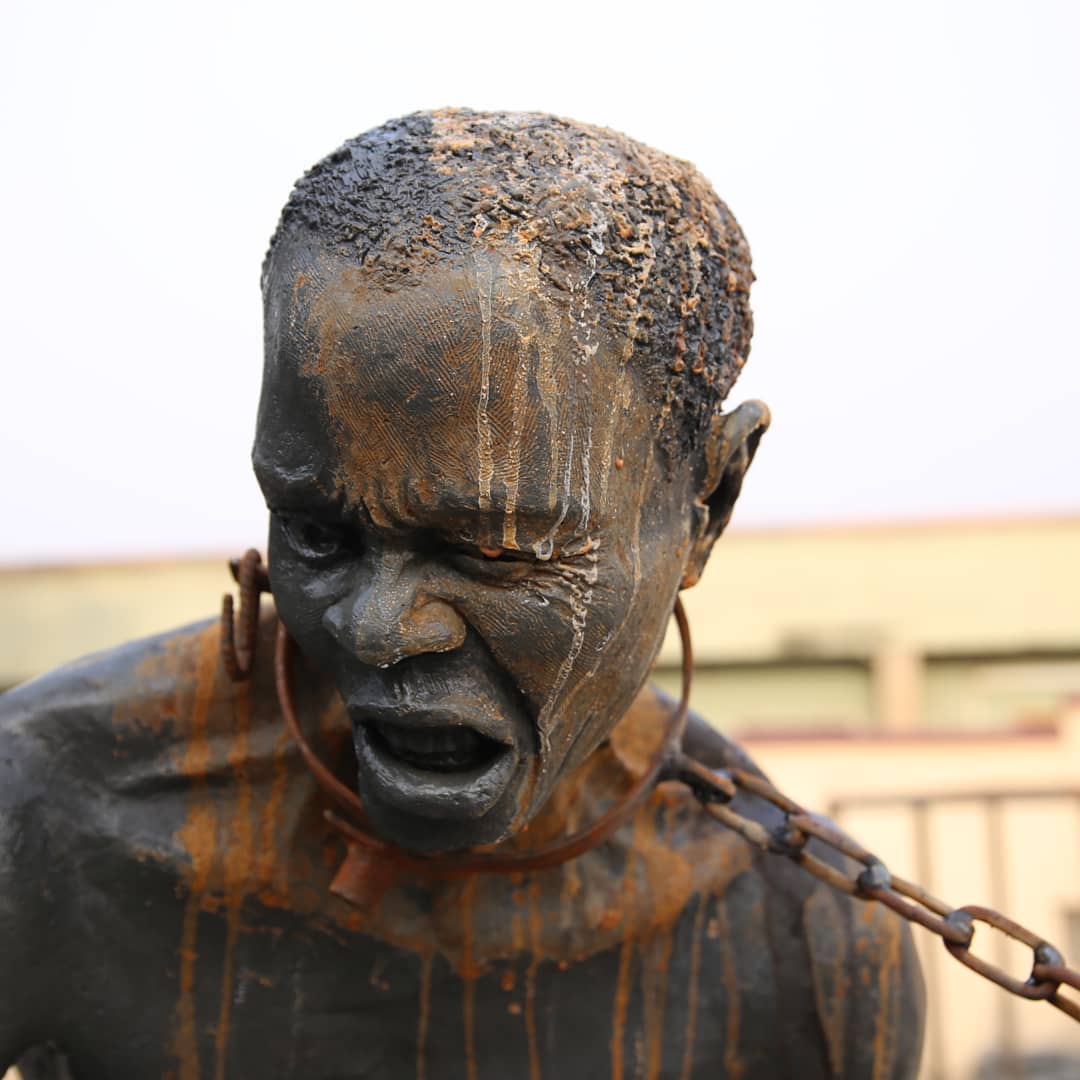 Kwame work is also a reflection of the pain African creatives and Africans in general face.

The conversations around transatlantic slave trade and colonialism across African countries are quite heart-wrenching, and sombre. There are mixed feelings – splinters of a past that continuously haunts. There are tears, miseries, anger, pain, disgust and so on. Kwame is used to these and more.

People’s reactions are very varied. It doesn’t come as a surprise to me because I identify that people are at various stages in their healing – in the acceptance of who they are as Africans, their place in this world and their place within history, as it has unfolded and as it is unfolding.

The good thing about Nkyinkyim Museum is that it is laid out to receive these varied emotions. The section dedicated to slavery is set up in such a way that people are allowed to be. And when they break down, they can recover. 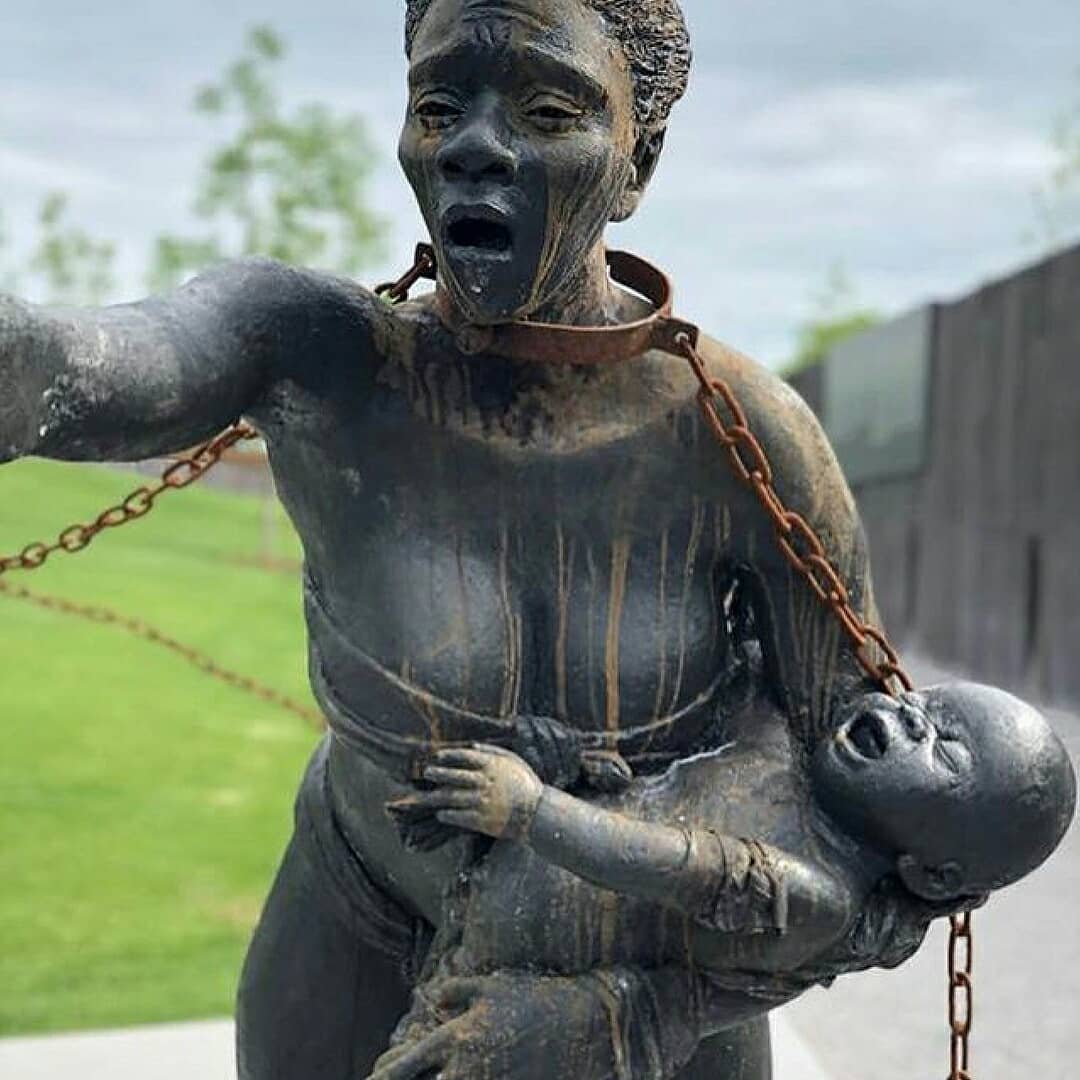 Kwame Akoto-Bamfo is one of Ghana most-cherished artists and one of Africa’s finest sculptors. But he didn’t just stumble upon fame; he worked hard for it.

To break through, the first thing that I did was extreme discipline. I graduated first class. I have always been top of the class or one of the best, especially at the university and during my masters programme. Though I started working and I got a certain level of exposure early, I don’t assume that I’m the only magnificent creative out there. That is one thing any creative who wants to be successful will have to realise.

I was one of the best in my class, but it didn’t mean that things were just handed to me. In fact, I had to go take multiple jobs to be able to raise funds to finance what I do as an artist. It is the same, even now with my museum, my academic mentorship programme, my philosophical funds. Everything I do is self-funded. As an institution, we are yet to receive grants or some kind of funding or grants. Still, we are growing to be one of the largest museums in Ghana. 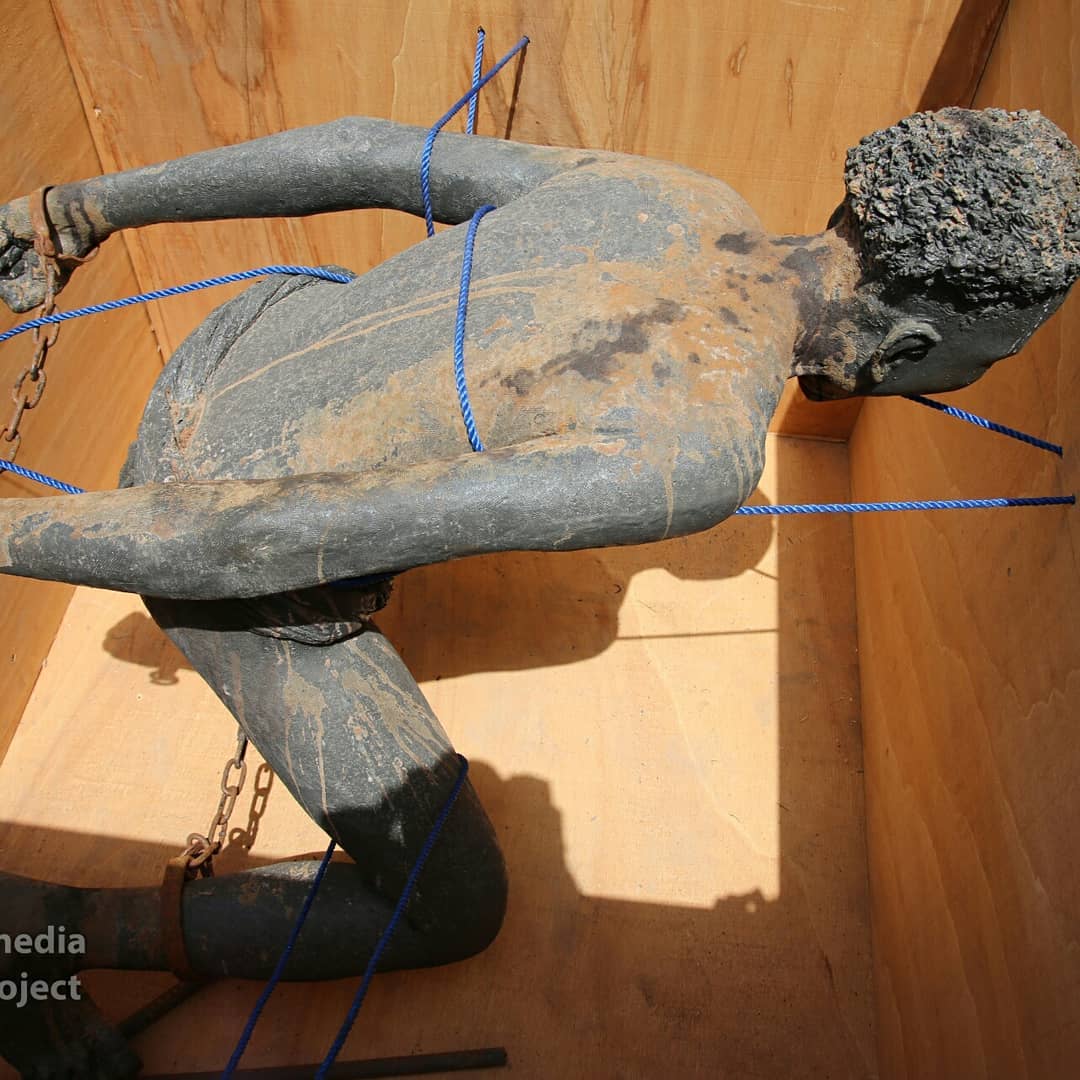 Then there’s the place of cultural beliefs, societal expectations, and living in a developing country.

It’s a different experience for us; we don’t have the financial support as other countries may have. We may have verbal support, but not always the financial support. In some places, you may not even have the verbal support in the first place, either because of religion or identity – what your community identifies with, and what you choose to do. There are so many challenges and on so many fronts. In fact, for an African artist, it is extra difficult and challenging. I try to support as much as I can, but I don’t think that it’s one person’s job. I think it’s something that has to be done as a community, and then as a nation.

What happens is you grow resilience to some of the challenges, and then some aspects also get easier with time. I’ll just encourage other people on the path to be resilient because that ideal African artist you see in documentaries is almost non-existent. We are in countries that may have just been barely 67 years from colonialism, and are trying to compete on the world stage.

For so many creatives, funding is a big deal. How do you bring all these grand ideas into fruition when you are still struggling to get by daily? Kwame says for African artists, “it is what it is.” But even when it looks like the world is rigged against you and your work, you have to keep pushing.

If you’re also an upcoming artist, this is what you should think about: that you are creative, you are amazing, you’re great. And your time will come. But until it comes, you don’t leave your fate, destiny, or success in somebody’s hands. You don’t say “hey, until I get this funding, I’m not going to do this.” You take a little step at a time. That’s what I do. That’s what I continue to do and it’s what puts me on a world stage.

I was hoping for funding, I didn’t get it, but I got good jobs that helped me fund my projects. So you don’t have to just wait for funding. If you keep working and being professional, you are definitely going to get good jobs because people are looking for professional artists to work with all the time. And with this comes funding.

Another way is for young and old creatives to work together. 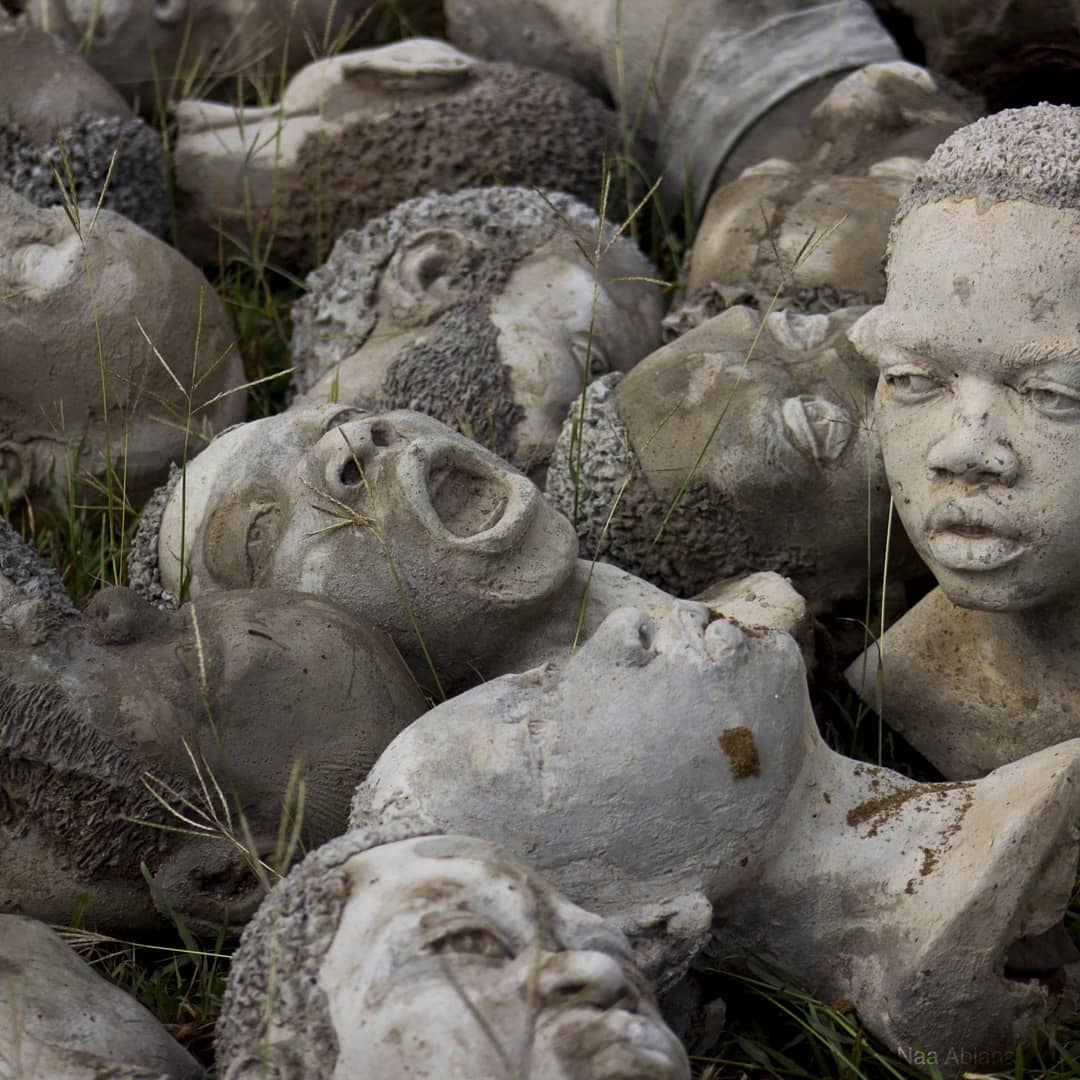 Funding is not the only problem Kwame faces as an artist in Ghana. Being in the creative space comes with its own challenges, but these challenges can be easily chested by Kwame. But as a philanthropist who makes donations to art centres and villages, sometimes, he is almost inveigled into give up.

I’ve had quite the issue with philanthropy and social work. Sometimes, the people you’re working, out of ignorance, would be fighting you instead of helping you. Some people don’t want to accept that they are Africans like me. Some don’t know the money I spend is from my pocket and they think I have been given a large sum of money I’m hoarding, or funded by some organisation. And it’s not because I’m so rich that I have money to give, I’ve always done this work even when I had just little. Sometimes, I begin to wonder if philanthropy is really necessary or not. Those are the times I get shaken.

Kwame works address social issues – a beautiful form of protest on its own. But being a social activist is equally tough. He says that Africa is plagued by too many issues that one begins to wonder which should be tackled first or what exactly is your fight. Kwame believes that it is important for artists to identify their position and role in the society and for the people, still, he finds it comical that people expect artists to be the face of activism. After all,  “Activism is a collective responsibility. Everything counts – including a text on social media.” Want to know the best part of being a creative is for Kwame? For him, it is the opportunity to use your work to make a difference in the community and in the world. Many years ago, he’d have said the attention and the women, but now, Kwame his all about impact and making a difference. For him, “It’s a gift and an honour.”

BN Creatives’ Corner is a series that gives creatives living and working in Africa the platform to showcase their work, talk about their journey, struggles and highlights of being creatives in Africa. We have told the story of Anne Adams who bends clay to create stunning artwork, and Nana Frimpong Oduro whose art explores the many aspects of our split personalities, TJ Benson, a writer, Renike, a visual artist,  Cera Cerni who paints life into walls , and many more. You can read them all here.

Many thanks to Kwame Akoto-Bamfo for having this conversation with us and letting us share his story. You can visit his Instagram pages: Osrambia_media, and nkyinkyim_museum, to see more of his works.

Nigerian Content Creator shares photos showing how she has moved away from the trenches.