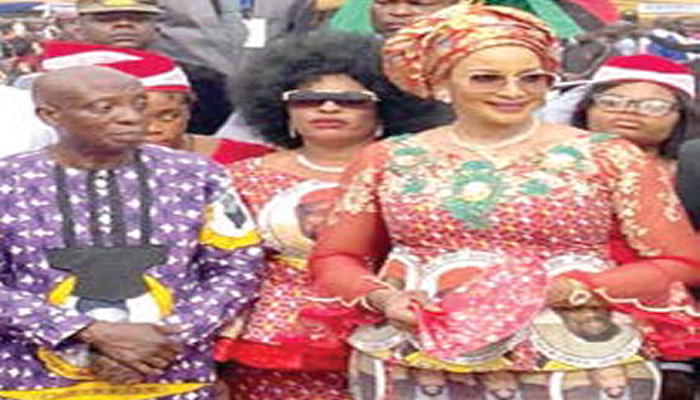 Eleven years after the demise of Biafran leader and a former military governor of the Eastern region of Nigeria, Odumegwu Ojukwu, his wife Bianca, has continued to keep his memory alive.

Since Ojukwu’s demise on November 26, 2011, Bianca has been playing her part to sustain his ideology at the national and regional levels, particularly on issues that concern Igbo people.

In his lifetime, Ojukwu was revered and respected by the people of the Eastern region, and even in death, he occupies an importance space in the hearts of many.

To mark the eleventh anniversary of his death, a cultural fiesta was held in his honour on Tuesday, November 29, 2022, in Owerri, the capital of Imo State.

Speaking at the event, Bianca said, “Nobody can hold the Igbo spirit down. This is one truism many people have refused to appreciate. Ndigbo have always opted to hold our heads very high, rather than to die on our knees, begging.

“I plead with the Federal Government to let Mazi Nnamdi Kanu have his freedom. I call for his unconditional release from prison. We are in a democracy. No country that brazenly hold its citizens in captivity, ever progresses, develops or fosters the spirit of patriotism in the citizenry.”

The well attended carnival-like event was attended by thousands of people, including traditional rulers, clergy, and Biafra war veterans.