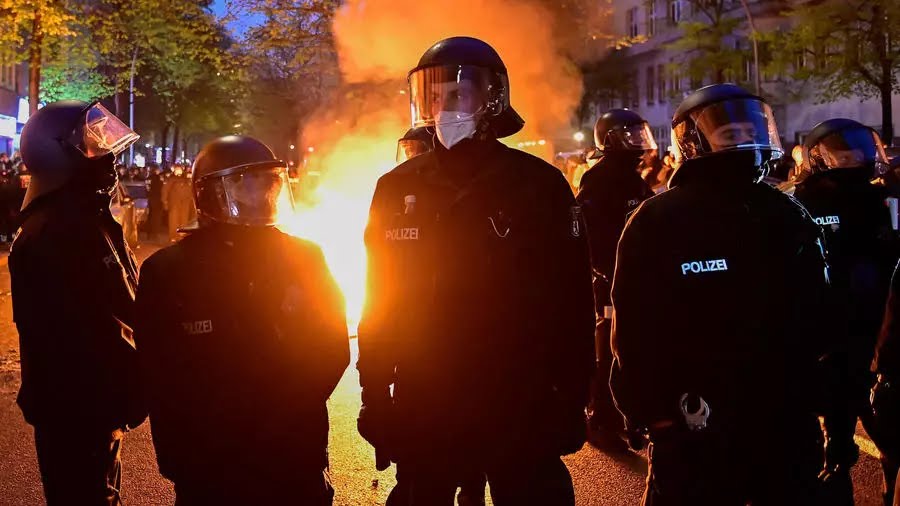 The German capital deployed around 5,600 officers on Saturday to monitor the May Day protests.Tobias SCHWARZ/AFP

Berlin police on Sunday said they had arrested some 240 people after May Day rallies descended into “unacceptable” violence that saw protesters pelt officers with stones and bottles and set fire to bins.

More than 30,000 people from across the political spectrum took part in several marches in the German capital on Saturday as part of the traditional Labour Day workers’ rights demonstrations.

Most of the demonstrations passed off peacefully, police said.

But the mood darkened in the evening after police pulled far-left “black block” protesters out of the crowd for not adhering to pandemic hygiene regulations such as social distancing.

Along with thousands of others, they had been marching in the “Revolutionary May Day” demonstration to protest racism, capitalism and rising rents in the city.

Heavy scuffles ensued, with protesters throwing glass bottles and stones at police and setting dustbins and wooden pallets ablaze in the streets.

Around 20 officers were injured by the time the protest was broken up, Berlin police said.

“The situation did degenerate but was quickly brought under control,” she added.

The German capital had deployed around 5,600 officers on Saturday to monitor the May Day protests, which have turned violent in the past.

Similar protests took place around the world, some of which also descended into skirmishes.

In Paris, police fired tear gas at protesters who smashed windows of bank branches, set fire to dustbins and threw projectiles at police.

Miyetti Allah Chairman In Kogi Was Arrested, Not Kidnapped – Group...

Why State Police Will Not Work In Nigeria – Ex-Enugu Governor...