The Beijing Winter Olympics torch relay began its truncated journey to Friday’s opening ceremony as China tried to move on from the diplomatic boycotts and Covid fears that have dogged the build-up to the Games.

The sport starts later Wednesday with curling, two days before the official opening of an Olympics overshadowed by controversies ranging from rights concerns to Peng Shuai and warnings about snooping by the Chinese government.

Adopting the catchphrase “Together for a shared future”, China, its ruling Communist Party and the International Olympic Committee hope all the rancour will be forgotten once the Games get into full swing.

When Beijing hosted the 2008 Summer Games, the torch relay took in swathes of China and other countries — where it met protests in places — but this time it will last just three days, ending at the “Bird’s Nest” stadium for the opening ceremony.

Beijing 2022 official Cai Qi said at the start of the relay — which will involve more than 1,000 torchbearers and reportedly included former NBA star Yao Ming — that he hoped the Games would help “dispel the gloom of the pandemic”.

If the 2008 Olympics were the country’s coming-out party, these Games will take place in China under President Xi Jinping which is increasingly belligerent on the global stage and boasting the world’s second-largest economy.

When Washington said it would stage a diplomatic boycott because of rights concerns — with Australia, Britain and Canada among those following suit — China warned the United States would “pay the price”.

The Biden administration will not send diplomatic or official representation over what it called China’s “ongoing genocide and crimes against humanity” against Muslim Uyghurs in the region of Xinjiang.

Athletes of the boycotting countries will compete at the Games, which run until February 20, but a US rights monitor sounded the alarm this week over athletes’ safety after the hosts threatened “punishment” for anti-Beijing comments.

The Congressional-Executive Commission on China — a group of Washington lawmakers and White House officials — asked US Olympics authorities for an “urgent effort” to protect their stars if they speak out.

There are other controversies. IOC president Thomas Bach says that while in Beijing he will meet Peng, a Grand Slam-winning tennis player who alleged in November that she had been sexually assaulted by a former vice-premier.

Peng was not heard from for nearly three weeks, only to reappear, but there are concerns about how free she really is.

Fearing surveillance, some Western nations have told their athletes to leave their personal devices at home and use temporary burner phones.

There are signs that China is tightening the noose on anyone daring to spoil the party, with human rights activists and some academics having their WeChat messaging app accounts restricted in recent weeks.

China, where Covid-19 emerged towards the end of 2019, has pursued a zero-Covid policy nationwide and is taking the same approach at the Olympics by cocooning all participants inside a “closed-loop”.

The highly infectious Omicron variant presents a new challenge, both to the Games and the country, putting already jittery authorities further on edge. Cases in Beijing have been ticking upwards, albeit from a low base number.

Organisers say they expect cases in the bubble — nearly 250 have already been recorded — but their goal is to keep the spread to a minimum.

They hope the bubble will be impregnable, keeping the nearly 3,000 athletes together with tens of thousands of support staff, volunteers and media cut off from the outside world.

China barred overseas spectators because of the pandemic but there will be a limited number of spectators and organisers say the venues could be up to 50 percent full. 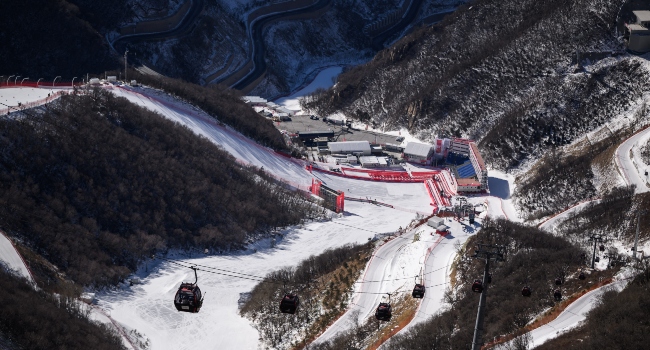 General view of the technical venue at the National Alpine Skiing Centre in Yanqing ahead of the 2022 Beijing Winter Olympics, on February 2, 2022.
Fabrice COFFRINI / AFP Face of the Games

The Games will be held in three zones. In addition to downtown Beijing, the two other areas are outside the capital and will rely on artificial snow to cover what would otherwise be brown mountainsides. Environmentalists have voiced concern.

It is easy to forget there is some sport actually taking place.

American ski ace Mikaela Shiffrin is chasing a third slalom gold, while Japan’s Yuzuru Hanyu is looking to make it a hat-trick of figure-skating Olympic titles.

There will be huge interest in Chloe Kim, the American snowboarder who melted hearts when she won gold aged 17 at the Pyeongchang Olympics in 2018, while Eileen Gu looks like being the face of the Games.

The 18-year-old grade-A student, born and raised in California, switched from the United States to represent China and is a hot favourite in freestyle skiing.