Deborah James has shared her frustration at contradicting rules amid the coronavirus pandemic, meaning tens of thousands of football fans are allowed to congregate but she isn’t allowed to have visitors in hospital.

The BBC podcast presenter, 39, who has been living with stage four bowel cancer since being diagnosed in December 2016 tweeted from hospital about the confusing Covid rules.

She wrote: ‘I think I’m done with the ridiculous “rules”. It’s my 3rd night in hospital. I’ve spent too long here recently.

‘I see everyone jumping on each other to celebrate the football. I’m not allowed any visitor in to help me through a rough time. Enough is enough #MentalHealthMatters’.

Deborah, who hosts You, Me and the Big C, revealed last month that she has a new tumour near her liver, which has wrapped itself around her bile duct.

She shared a tearful video on her Instagram story, adding: ‘Good evening from a very fed up girl who is now day three in hospital for an infection that’s getting treated. 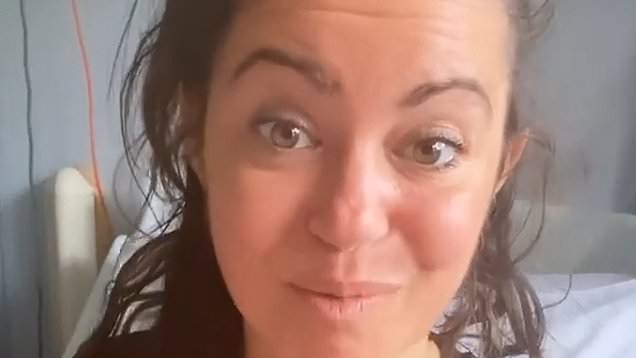 ‘I’ve been crying for most of the day, I have to be honest with you. Do you know why? Because I’ve requested, time and time again, I was like “Can I just have a visit, can my mum just come and see me?”

‘And I’m seeing – sorry I’m going to try not to cry. Not that crying is bad but I will get myself so worked up and I’m alone.

‘I see everybody at Wimbledon – I was there – and everyone enjoying the football, and I get that it is to protect people but I also think, you know what, mental health as well. When you are at your lowest point, you need the people around you that you love because they are the ones that are going to get you through it.’

During the coronavirus pandemic, most hospitals stopped or significantly limited visitors in order to protect patients from the risk of being infected.

Researchers have suggested that gatherings to watch Euro 2020 may be the reason men are currently a third more likely to test positive for Covid-19 than women, adding that it was the first time a notable difference was observed between the number of men and women testing positive for the virus.


MORE : Holly Willoughby is a lady who lunches as she makes chic outing in London