The Elders’ Caucus of the Peoples Democratic Party (PDP) in Odo-Otin Local Government Area of Osun State has described the physical attack on Olagunsoye Oyinlola, a former governor of the State as a deliberate plot to have him humiliated.

This is also as the Odo-Otin PDP Elders’ Caucus described the physical attack as a case of attempted murder.

Olagunsoye Oyinlola, a former governor of Osun State was physically assaulted on Wednesday, February 16, 2022, in Osogbo by suspected supporters of Senator Ademola Adeleke.

The attack, which trended on social media, was roundly condemned by notable individuals within and outside the State.

In a statement jointly signed by Rasaq Oyelami, Chairman, Elders’ Caucus, PDP, Odo-Otin and Soji Ibikunle, the Public Relations Officer, the caucus stated that the act was not acceptable to them.

They acknowledged that the attack on Oyinlola was a clear indication of a deliberately sponsored plan, revealing that it was disheartening that the suspected gubernatorial aspirant and his handlers had not shown remorse and offered an apology in order to douse tension.

According to the statement, “It is disheartening that up till now, the handlers of this said gubernatorial aspirant, Senator Ademola Adeleke are yet to show remorse and send an apology to Prince Olagunsoye Oyinlola to douse tension.

“For this reason, it is a dear indication that the handlers of the said gubernatorial aspirant deliberately sponsored the attack on Prince Olagunsoye Oyinlola.” 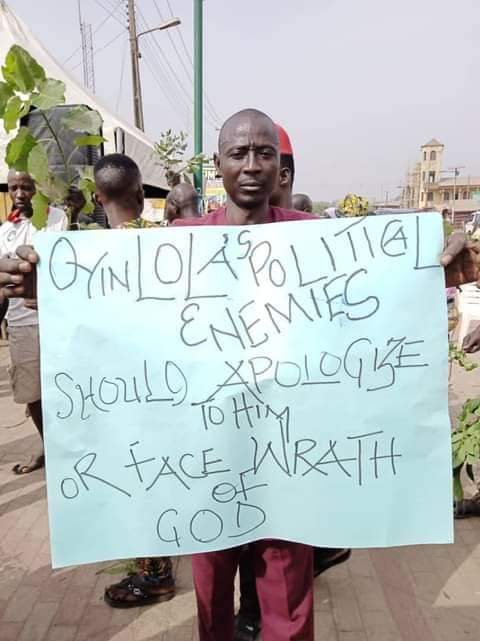 While stressing that its supporters may resort to self defence in the face of future provocations, it called on the Osun Commissioner of Police to investigate the assault with a view to punishing the perpetrators and their sponsors in the interest of peace in the State.

Meanwhile, Senator Ademola Adeleke has condemned the attack on the former governor, describing it as uncalled for and contrary to the peaceful code of politicking his family is known for.

Adeleke, in a personally signed press statement obtained by Newspot, stated that he has been closely working with Oyinlola to ensure peaceful reconciliation within the Osun PDP.

He disclosed that he had no reason to sponsor or support any attack on the former governor.

In his words, “As a family and group, we cherish peaceful interactions despite any temporary political differences. The former Governor deserves the support of every stakeholder, as efforts are ongoing to ensure permanent restoration of unity and brotherhood within the party.”

The PDP gubernatorial aspirant also expressed concern over accusations that his elder brother, Deji Adeleke was also a sponsor of the said attack on Oyinlola.

While stating that he found it reprehensible for anybody to embark on a smear campaign against his brother, he revealed that neither his brother nor himself was involved in the attack on the former governor or any leader of the party.

“Those attacking Deji Adeleke over the incident are, therefore, chasing shadows and are wrongly targeting a brother whose life is dominated by peace and tranquility.

“I make bold to say that my ambition has always been peacefully driven. I enjoy massive goodwill and backing of the people as I relate with the people on a daily basis. Therefore, I did not and will not, under any circumstance, authorise or sponsor any molestation of party elders and leaders.

“I consequently urge our party elders, leaders, men and women, including Prince Oyinlola to disabuse their minds and set the records straight on this incident. The Adeleke family has no hand in the said incident. We remain peace loving, rule observing and unity-seeking actors within the PDP,” the statement concluded.