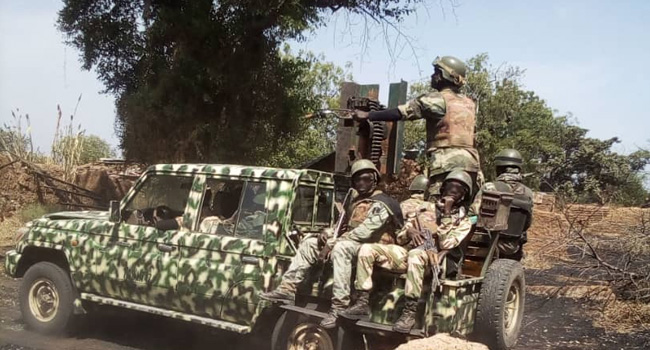 A convoy conveying officials of the Borno State Government has been attacked near Monguno town.

The officials were ambushed by Boko Haram terrorists on Friday while they were journeying to Baga, where Governor Babagana Zulum is expected to receive returning IDPs.

It is still uncertain what the real casualty figure is, but sources say at least five security men might have been killed in the ambush.

It was, however, gathered that the casualties include both police, military personnel, and an unspecified number of civilians.

An Armoured Personnel Carrier belonging to the police as well as state government vehicles were reportedly hijacked in the attack.

Governor Zulum had flown in an Airforce chopper to Baga earlier today, where he performed the Friday prayers with troops.

The governor is expected to receive about three thousand civilians who will be transported from IDP camps both in Maiduguri and Monguno on Saturday.

The attack on Friday is the second of its kind, stirring great concern.

Earlier in July, the convoy of the Borno State Governor, Babagana Zulum, narrowly escaped a terror attack in Baga town.

Governor Zulum had departed Maiduguri, the state capital for the northern part of the state in continuation of a food distribution programme, and a few kilometers to the town, gunmen opened fire on the governor and his entourage.

Distraught by the attack, Zulum confronted the army expressing his disappointment at the inability of the military to rid Baga and environs of insurgents.

“You have been here for over one year now, there are 1,181 soldiers here; if you cannot take over Baga which is less than 5 km from your base, then we should forget about Baga. I will inform the Chief of Army Staff to redeploy the men to other places that they can be useful,” Zulum said.

The governor insisted that there is sabotage in the system that will not allow the insurgency to end in the North East.

He claimed that some elements are trying to frustrate the effort of the government in ending the insurgency, stressing that “President Muhammadu Buhari needs to know the truth”.

The military in reply to Zulum’s claims said the governor’s theories are unfounded.

Speaking on behalf of the army, Major General Felix Omoigui, the Deputy Theatre Commander Operation Lafiya Dole, warned that such remarks by a highly placed person are capable of demoralizing the troops, a situation which would negatively impact on operations and the confidence of the soldiers at the frontlines.

US On Alert For Armed Protest – Newspot

NIMC To Reactivate 20 Centres For NIN Enrollment In Abuja – Newspot

US On Alert For Armed Protest – Newspot