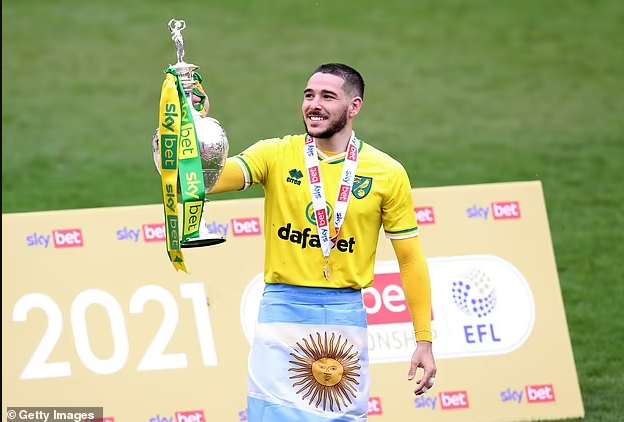 Aston Villa have announced they have reached a £40million agreement to sign Norwich star Emiliano Buendia, handing Arsenal a huge transfer blow after they also showed interest to also sign him.

The 24-year-old midfielder is currently on international duty with Argentina and is set to have his medical before completing his move to Villa on Tuesday after a World Cup qualifying game against Colombia.

Villa confirmed the agreement on Monday morning, adding the transfer for Buendia will be completed after Argentina play Colombia on Tuesday evening. The fee Villa will pay could rise to nearly £40m with bonus add-ons.

Buendia was named Championship player of the season for 2020-21 following Norwich’s promotion to Premier League.

He scored 15 goals and registered 17 assists in the league and was rewarded for his fine form with his maiden call-up to the Argentina squad as well as the Championship Player of the Year gong.

Norwich signed Buendia from Getafe for a little over £1m in June 2018 and he has since scored 24 goals and provided 42 assists in his three years so far at Carrow Road.

EFCC boss, Abdulrasheed Bawa, recounts how a minister connived with a bank MD to launder $37m

How My Sister Was Fired For Being Related To Me —...