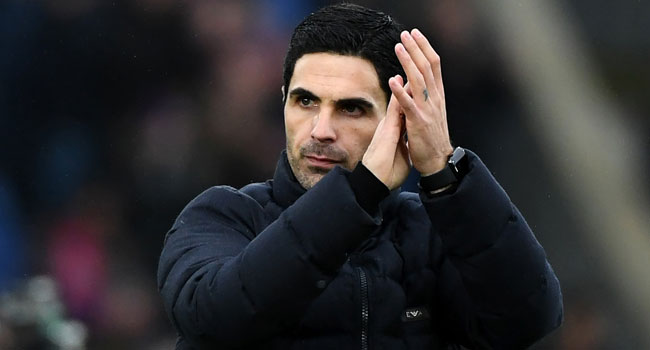 Arsenal manager Mikel Arteta said he does not understand VAR after its role in the red card for young Gunners forward Eddie Nketiah’s in Tuesday’s 1-1 draw with Leicester.

Nketiah was sent off seconds after coming on when his late lunge on James Justin was deemed worthy of a sending-off by referee Chris Kavanagh after he came to the side of the pitch to review the incident.

“In the last year I have never seen a referee check any images,” Arteta told Sky Sports.

“I do not understand the rules. But I can do nothing now.”

In January this year, the Professional Game Match Officials Limited, the body that manages elite referees, said referees should start using pitchside monitors for red card decisions where it is felt they should have the final say.

Following that advice Southampton’s Moussa Djenepo was red-carded by Graham Scott after he used the monitors to review a foul in the 1-0 defeat by Newcastle on March 7.

Arteta felt there was no consistency and a Leicester player should have been sent off in the closing minutes of the first half.

“It can be a red card but then Leicester have to play with 10 men,” said Arteta.

“For an incident that happened between the 40th and 45th minute, it has to be a red card as well.”

Arteta is the latest manager to question VAR with Chelsea’s Frank Lampard, Everton’s Carlo Ancelotti and Jose Mourinho of Tottenham Hotspur calling for a review of the rules at the season.

The draw left Leicester fourth and still in the running for a Champions League place while Arsenal are seventh.

Our citizens are dying due to bad roads – Kogi Assembly...