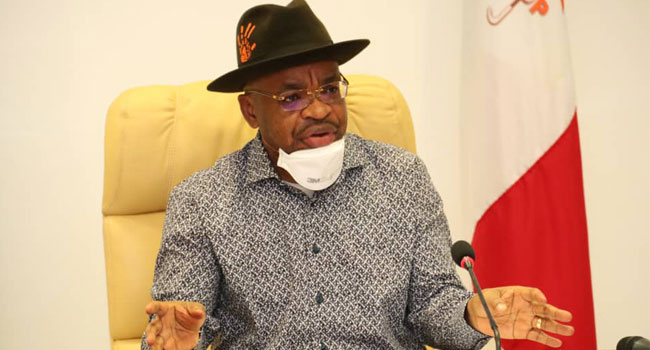 The Court of Appeal sitting in Lagos has struck out Governor Udom Emmanuel’s name from 4 out of the 10 count charge filed by the Economic and Financial Crimes Commission, EFCC against the President of the Nigerian Bar Association, Paul Usoro.

Justice Bello Aliyu struck out the Akwa Ibom State governor’s name in the 4 counts in which he was specifically named.

In the charge, the EFCC claimed that Usoro converted and laundered N1.4bn in connivance with the Governor.

Though Gov Emmanuel was named in 4 counts of the charge he was however not listed as a defendant as the anti-graft agency indicated that he is “currently constitutionally immuned against criminal prosecution”.

One of the counts of the charge reads, “ That you Paul Usoro SAN, Emmanuel Udom (currently constitutionally immuned against criminal prosecution), Uwemedimo Thomas Nwoko (still at large), Nsikan Linus Nkan (Commissioner for Finance, Akwa Ibom state) (still at large), Mfon Jacobson Udomah (Accountant General of Akwa Ibom state) (still at large) and Margaret Thompson Ukpe (still at large) sometime in 2015 in Nigeria, within the jurisdiction of this Honourable Court conspired amongst yourselves to commit an offence, to wit, conversion of N1.4 billion, the property of the government of Akwa Ibom state of Nigeria, which sum you reasonably ought to know forms part of the proceeds of unlawful activity to wit; criminal breach of trust and thereby committed an offence contrary Section 18 (a) of the Money Laundering (Prohibition) Act, 2011 and punishable under Section 15(3) of the same Act.

At his re-arraignment on March 1, 2019, before Justice Rilwan Aikawa of Federal High Court, Lagos, the NBA President pleaded not guilty to the offence.

On the 30th of May, 2019, Justice Aikawa dismissed an application filed by Gov. Udom, seeking to quash the entire charge preferred against Usoro and the others.

Justice Aikawa held then that Udom’s application lacked merit because he was not a party to the suit.

Dissatisfied with the ruling, Udom’s lawyer, Dr. Charles Mekwunye filed an appeal against the court’s decision.

The Court of Appeal in a unanimous judgement read by Justice Aliyu today allowed the appeal filed by Udom against the ruling of the Federal High Court.

Rema openly apologizes to his friend, Eric for stealing his laptop...

Woman drags husband to Court over sale of family property in...