A hacker group, Anonymous, has hacked the Twitter handle of the National Broadcasting Commission (NBC).

The group in the early hours of Friday, tweeted using the NBC official handle, supporting the #EndSARS movement.

“We #Anonymous have taken over all the NG Official Twitter’s Account to support #ENDPOLICEBRUTALITY,” the group said in one of the tweets on the NBC handle.

“WE’RE TOGETHER WITH NIGERIANS. EXPECT UNEXPECTED.” 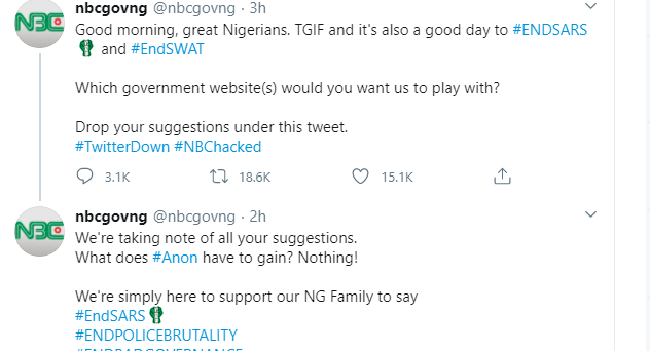 It also called on Nigerians to suggest other government websites for hacking.

It equally vowed to expose the Nigerian government.

We #Anonymous have taken over all the NG Official Twitter’s Account to support #ENDPOLICEBRUTALITY.

WE’RE TOGETHER WITH NIGERIANS.

The commission confirmed on their official Facebook page that they have indeed been hacked, adding that the public should disregard the tweets currently on the timeline.