The Ligue 1 giants capped off an incredible summer window by landing six-time Ballon d’Or winner Messi on Wednesday after Barcelona unable to register a new contract for the 34-year-old, widely regarded as the greatest player in history.

At his opening press conference as a PSG player, Messi said he was excited about forming a ‘really crazy’ front-three with ex-Barca team-mate, Neymar, and Mbappe at the Parc des Princes.

But according to Gazzetta dello Sport, Mbappe has major concerns about the impact Messi’s arrival could have on his situation as he fears the Argentine’s presence could put him in the ‘shadow’. 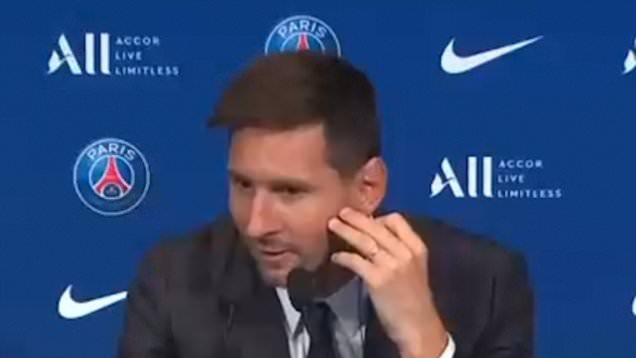 The report indicated that the Frenchman could even look to initiate talks with PSG to announce his desire to leave this summer, with Real Madrid long-term admirers.

However, PSG winger Di Maria played down these rumours during an interview with ESPN and predicted Mbappe would still be his team-mate when the transfer window closes.

‘It’s obvious he’s a player that all the great teams want but with the squad that PSG have now, I don’t think he’s going to go away.

‘I don’t also don’t think he will find a better team than this one.’

A beaming Di Maria said he was delighted that Messi was now his team-mate at both club and international level.

‘Everything I dreamed about happened in one month; winning the Copa America and being able to play with Leo in the same team.

Earlier this week, PSG president Nasser Al-Khelaifi said he was ‘very positive’ Mbappe remained a key part of the club’s future, despite the Frenchman entering into the final 12 months of his contract in the capital.

‘I don’t want to dwell on the subject. I speak about what’s happening with Kylian to him and his family,’ he told reporters.

‘You know my position, it hasn’t changed – Kylian is at the centre of our project.

‘Right now we have a very strong team, one of the best in the world – I won’t say the best because we still have things to work on.

‘I think Kylian has everything he needs to stay here.

‘I’m very positive, nobody would understand if he left now.’


MORE : Romelu Lukaku explains why he has returned to Chelsea for second spell

“It’s deeper than we understand” – Mixed reactions as singer Omah...

“It’s deeper than we understand” – Mixed reactions as singer Omah...