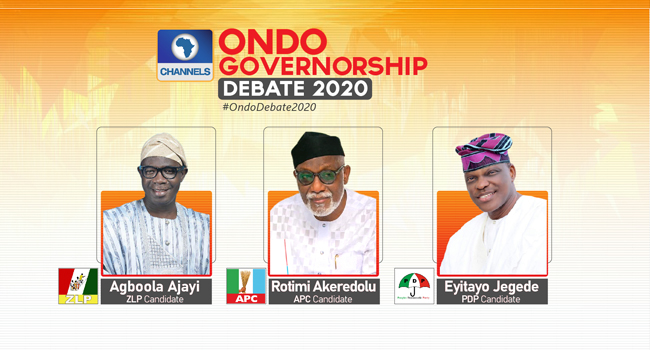 All is now set for the debate between some of the candidates taking part in the Ondo State Governorship election billed for Saturday.

Three out of 17 candidates were selected and they will take to the stage tonight in an encounter that hopes to unearth the plans of the candidates and how they hope to achieve them.

The debate is being organised by Newspot, in partnership with the Civil Society Elections Situation Room and UK AID with support from UK foreign commonwealth development office.

On Tuesday, the governorship aspirants signed a pact in the state capital, Akure, pledging to shun violence during the election and avoid actions that may undermine the peace accord.

The event, facilitated by the National Peace Committee (NPC), had in attendance, the Chairman of the Independent National Electoral Commission (INEC), Mahmoud Yakubu; and the Inspector-General Of Police, Mohammed Adamu, who was represented by the DIG Of Police, Research and Planning, Oyebade Adeleye, in attendance.

With the election drawing close, there have been claims and counterclaims about attacks from the two leading contestants, the candidates of the APC and the PDP.

In the weeks leading up to the election, the convoy of the PDP candidate, Jegede has been attacked severally – a situation which he credited to ‘hoodlums’ who according to him, escort the governor.

Read Also: When You Have A Bright Chance, That’s When They Conspire – Jegede

“Why should hoodlums be following a governor?,” Jegede asked, in an interview on Channels TV last Wednesday, as he reiterated that it can only be because they are threatened by him.

The APC, on the other hand, has accused the PDP of attacking its party properties in Owo the hometown of incumbent Governor Rotimi Akeredolu.

They also accused some supporters of the opposition party of shooting at passers-by and damaging their vehicles, shops and other building in an attack.

While both parties have denied responsibility of the attacks, they have now signed the pact, agreeing to a violence-free exercise.

Jegede had contested in 2016 under the PDP and is hoping to secure a victory this time.

Also looking to secure a second term, Akeredolu on Tuesday, gave an assurance that the election will be peaceful, even as he urged INEC to ensure that the exercise is free, fair and credible.

The debate will start at 7:00 pm and you can catch it on Channels TV or follow our live updates on all our social media platforms with the hashtag, #ONDODEBATE2020.

Man sentenced to 78 Years in prison for stabbing his three...