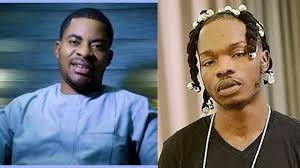 Activist, Deji Adeyanju has described Naira Marley as a ”coward” after he canceled the #EndSARSbrutality protest he planned to lead on Tuesday October 6.

Naira Marley had on Monday, October 5 announced he was planning to lead a protest against SARS brutality.

However, on Tuesday morning, the singer announced the protest has been cancelled and that he will be engaging the police spokesperson, Frank Mba, in an Instagram live chat.

Deji appears to be against Naira Marley’s decision, He went on his Twitter to describe the singer as a ”coward”.

”Naira Marley the coward cancels #EndSARS Lagos protest. Not surprised at all. Only Nigerians can save themselves.”

Why I Settled For Scavenging – Master’s Degree Holder Spills