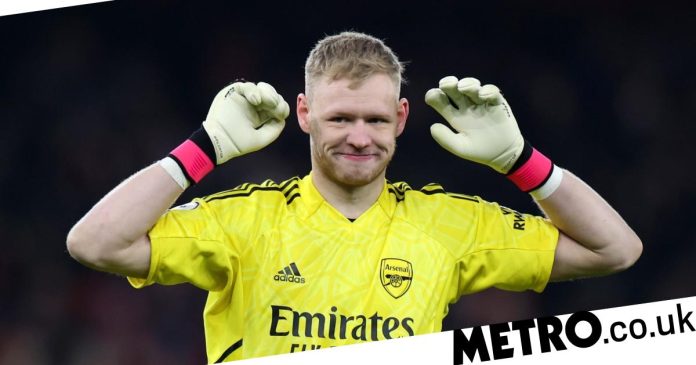 Aaron Ramsdale has revealed that he has been playing with a broken knuckle for Arsenal since the World Cup.

The 24-year-old has been in excellent form for Mikel Arteta’s side this season as the Gunners currently sit five points clear of Manchester City at the top of the Premier League.

Ramsdale was part of England’s squad for their World Cup campaign last month but did not feature in Qatar as Gareth Southgate kept Jordan Pickford as his first-choice goalkeeper.

But since the tournament, Ramsdale has revealed that he has been forced to play with specially adapted gloves because of a broken knuckle.

‘I’ll tell you something about those gloves, if you look at the two middle fingers there’s no gap,’ Ramsdale said on The Fellas podcast.

‘Trossard is coming in to take someone’s place in his head, he’s not coming to, it might look like he is coming to be part of the squad, deep down like I was with [Bernd] Leno,’ Ramsdale said.

‘Like I’ve come to take Leno’s pace, he’s coming to take one of the front three player’s place.

‘So if you start saying, ‘oh by the way we’ve signed Trossard’ before it happens, one of them front three might go, ‘hang on a minute’.’