In Augustine Eguavoen, Nigeria are relying on an interim appointment to lead them at the Africa Cup of Nations in Cameroon, albeit a familiar face who knows what it takes to be a continental champion.

The Super Eagles defeated Guinea-Bissau in their final group game in Garoua on Wednesday having already secured a place in the last 16 as winners of their section with two victories from two outings, including one over Mohamed Salah’s Egypt.

Garoua is a short hop from Cameroon’s border with Nigeria, where fans could be forgiven for already feeling optimistic about their team’s chances of winning a fourth Cup of Nations.

Their smooth start to the tournament has been in contrast to their tumultuous build-up which saw long-serving German coach Gernot Rohr sacked in December and Eguavoen named as a caretaker.

The vastly experienced Rohr, 68, had been at the helm since 2016, notably leading Nigeria to third place at the 2019 AFCON in Egypt. Many in the country felt Rohr had overstayed his welcome.

Eguavoen, 56, had been working as the Nigeria Football Federation’s technical director before being asked to replace Rohr and fill in on the bench until Portugal’s Jose Peseiro takes over.

The interim boss belongs to a golden generation of Nigerian players. He was stand-in captain as the team raced to victory in the 1994 Cup of Nations final against Zambia.

Nigeria also reached the last 16 of that year’s World Cup and Eguavoen later led the team to a third-place finish at the 2006 AFCON.

This is his third spell in charge. This time it came as a surprise to many in Nigeria where the decision to hand him the reins was not warmly received.

Many felt he was too close to the current leadership of the NFF in his role as technical director. 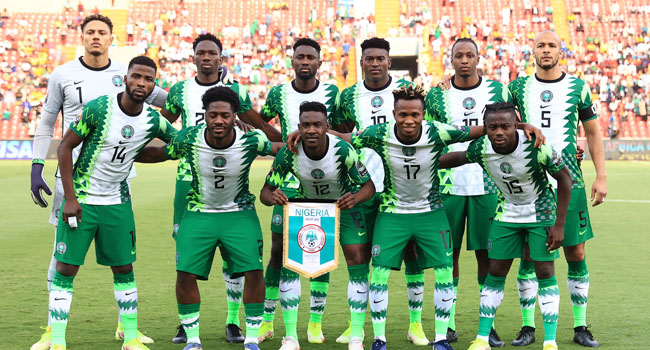 Remembered as a big and effective central defender, Eguavoen is a gentleman off the pitch and commands respect without being as popular as the likes of Okocha or Oliseh.

Yet he is confident of what he can achieve with a strong squad that is particularly fearsome in attack with Europe-based stars like Samuel Chukwueze, Kelechi Iheanacho, Moses Simon, and Taiwo Awoniyi.

Nigeria have started well and a favourable path is opening up to the latter stages. Should they go all the way, it could leave the NFF in an awkward position.

Peseiro, who has notably coached Sporting in his homeland, Egyptian giants Al Ahly and Saudi Arabia, is due to start work after the Cup of Nations, meaning he will be tasked with ensuring they qualify for the World Cup.

Yet NFF president Amaju Pinnick hinted that Eguavoen could keep the job should he lead Nigeria to glory in Cameroon.

“We know that Eguavoen can do the job expertly, but we also know that he will be more useful controlling the technical department,” Pinnick said following his appointment.

“If Eguavoen won the Cup of Nations, we might have a rethink. In that case, the foreign coach would become the technical director.”

For now, though, Eguavoen is not getting carried away.

“It is important for us to sustain the winning mentality while we keep our heads on our shoulders,” he told Nigerian media this week.

“We are yet to win anything here except points.”

PDP primaries: Iworiso-Markson reacts as Tompolo is killed in Bayelsa

Fly Researchers at Duke University Find Another Layer to the Code...