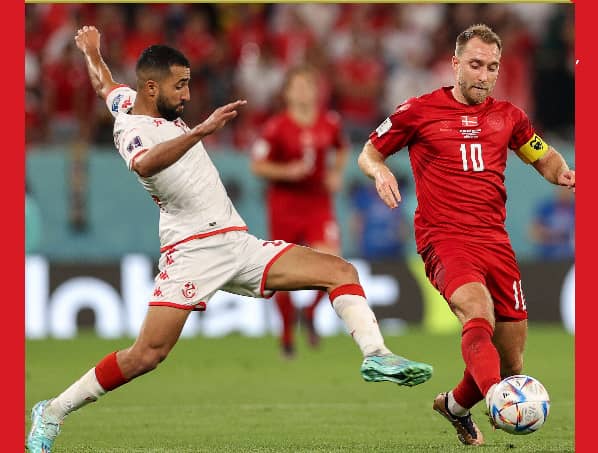 The Carthage Eagles of Tunisia were on Tuesday at Group D opening match held to a barren draw (0-0) by the Danish Dynamites of Denmark who refused to ignite when it mattered most.

Danish pocket dynamite, Ericson could not produce the sparkle that made him a football hero as the Tunisian defence marked him closely.

Though both teams were making their 6th appearances each at the mundial, Denmark’s best performance was a quarterfinal in 1998 when Spain showed them the exit door whereas Tunisia has never gone beyond the group stages of 1978, 1998 2002, 2006 and 2018.

Denmark is ranked 10th in the world and Tunisia 30th making the Danish team look better than the Africans.

Denmark played better having 5 shots on target to Tunisia 1; they had 62% ball possession meaning they dominated the game also with 11-9 corner kicks but goals win a match. Tunisia had 10 foul calls to Denmark 9 and one yellow card to Denmark’s two.

We await the result of France versus Australia to be handled by South African Ref Victor Gomes.

On Saturday, Tunisia will play Australia in the second group game and they are already tipped by soccer pundits to win. If that happens, Tunisia may move to the round of 16 which will better their record.

That Saturday will be the star match of the group in France versus Denmark which the Danish cannot afford to lose or they will be at the exit door.
Eniola Olatunji reporting.
#2022Qatarfifaworldcup.