Some of the items recovered from the arrested suspects are paraded at the Police Command Headquarters in Owerri on February 4, 2022.

A total of 150 suspects have been arrested in connection with terrorism, kidnapping, and armed robbery in Imo State, the police have said.

According to the Commissioner of Police in Imo, Rabiu Hussaini, the suspects were arrested within a period of one year, specifically between January 2021 and January 2022.

He made the disclosure on Friday while briefing the state governor, Hope Uzodimma, who visited the Police Command Headquarters in Owerri, the state capital.

Giving a breakdown of the figure, Hussaini explained that 105 of those apprehended were suspected kidnappers and the remaining 45 were suspected terrorists.

He admitted that he met a series of security challenges on the ground on his assumption of office to take charge of the command in August last year.

For the police commissioner, the Eastern Security Network (ESN) and proscribed Indigenous People of Biafra (IPOB), and others are to be blamed for the problems.

He, however, thanked the governor for his support which he said led to the vigorous and aggressive attacks on the terror groups and the decimation of their camps.

Hussaini revealed that the police were collaborating with traditional rulers, youth, and religious leaders, among other stakeholders on community policing. 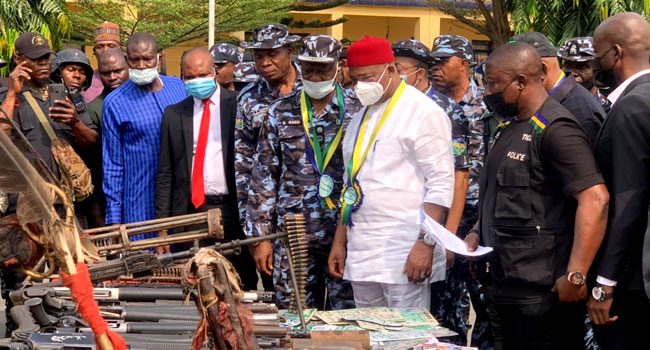 In this photo taken on February 4, 2022, the Commissioner of Police in Imo, Rabiu Hussaini, is seen with Governor Hope Uzodimma and others at the Police Command Headquarters in Owerri.

Read the full text of his briefing below:

AN ADDRESS PRESENTED BY THE COMMISSIONER OF POLICE, IMO STATE COMMAND, CP RABIU HUSSAINI PSC, ON THE WORKING VISIT OF HIS EXCELLENCY, THE EXECUTIVE GOVERNOR OF IMO STATE, DISTINGUISHED SENATOR HOPE UZODINMA TO IMO POLICE COMMAND.

I wish to use this opportunity to express my heartfelt appreciation to His Excellency, the Executive Governor of Imo State for finding time out of his stringent schedule to be here today. This visit marks a turning point in the history of the Command’s Anti-Kidnapping Unit and serves as a morale booster to all the officers and men of the Command.

Your Excellency, I assumed duty as the Commissioner of Police, Imo Command on the 11th of August 2021. On my arrival, I met a command faced with a lot of security challenges which include amongst others, the activities of organised local terrorist groups christened “Eastern Security Network (ESN)”, its Militia Wing, the proscribed Indigenous People of Biafra (IPOB) and others.

However, my sincere appreciation goes to Your Excellency for your wonderful advice and logistics support that assisted the command tremendously in launching vigorous and aggressive attacks on terror groups and the decimation of their Camps in the state, resulting in relative peace and tranquillity the state is enjoying today.

I am delighted to inform you that the general security situation in the state has improved considerably and to sustain it, a lot of strategies have been emplaced by the command.

Presently, we are collaborating with the traditional rulers, town union president generals, stakeholders, youth leaders, religious leaders, and hunters’ associations with an emphasis on community policing which has assisted greatly in combating violent crimes.

In spite of the Command’s Anti kidnapping Unit’s constraints, due to the lack of modern equipment used in fighting crimes, like serviceable vehicles, modern tracking devices, drones, and other vital security apparatus, it has recorded laudable achievements.

It will interest His Excellency to know that, between the Months of January 2021 and January 2022, the unit has arrested a total of One Hundred and Five kidnappers/Armed Robbers, Forty-Five Terrorists, and have recovered Twenty-Seven vehicles of different makes and assorted caliber of Arms and Ammunition.

However, I attribute these achievements to His Excellency, the Executive Governor of Imo State, Distinguished Senator Hope Uzodinma (ONWA IMO) whose purposeful leadership qualities, concern for the welfare of the officers and men, vision, and exceptional support has contributed and aided the command immensely in policing the state.

At this juncture, Your Excellency, may I respectfully request your assistance in the tarring of the only access road leading to the barracks and the Command’s Anti-Kidnapping Unit. As you might have observed, it is in a very deplorable condition and worse during the rainy season. Also, the command lacks modern barracks accommodation.

The majority of the officers and men serving in the command live outside. More so, the existing barracks were built in the colonial era hence, they are dilapidated, while some are obsolete due to large threatening cracks. Finally, the barracks lacks consumable water.

I also, wish to express my profound gratitude to Inspector-General of Police, IGP Usman Alkali Baba psc+, NPM, fdc for his constant directives and unrelenting logistic support that gave the officers and men the courage and zeal in the fight against terror in the State.

Finally, I thank His Excellency for this laudable visit and wish to assure you of the commitments of the officers and men of the Command in ridding the state of crime and criminality.

Thank you and God bless you, sir.