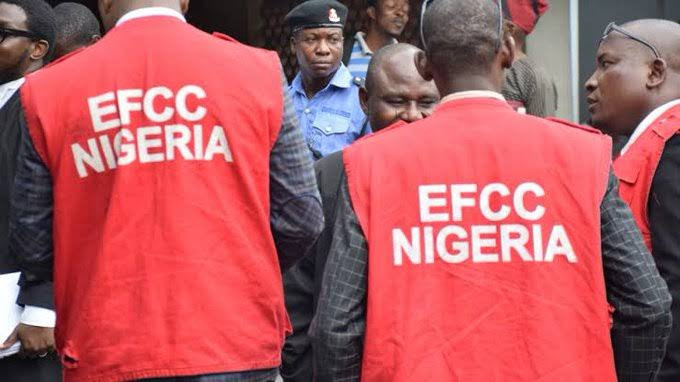 12 Economic and Financial Crimes Commission (EFCC) officials have been suspended indefinitely after being quizzed by the Presidential Investigation Committee, headed by Justice Isa Ayo Salami (red).

The new development comes days after 12 directors of the agency were suspended by the Presidency in relation to the ongoing probe of suspended Acting Chairman of the commission, Ibrahim Magu.

According to reports, some of the directors affected by the suspension had been a part of the team investigating Attorney-General of the Federation and Minister of Justice, Abubakar Malami (SAN).

The agency’s Secretary, Olanipekun Olukoyede was suspended while others affected by the suspension include Kabir Latona, Muhammed Abba, Ibrahim Buhari, Rotimi Oyedepo.

Before their suspension, some of the officers were handling sensitive investigations before they received letters notifying them of their suspension from the anti-graft agency on Monday.

A source speaking to TheNation said: “After being in limbo for one week, we got our suspension letters on Monday.

“We were informed that the suspension is indefinite. We have taken it in good faith. But most of us have not received queries in our career.

“We have not even appeared before any disciplinary committee. We appeal to President Mummadu Buhari to intervene by reversing the suspension.”

“It wasn’t a friendly session but we were able to make some clarifications on our performance in office.

“A Coordinator told the committee that service and loyalty to Nigeria guided their conduct in office rather than sentiments.”

ABOUT US
Newspot Nigeria is specifically to bridge the gap between the conventional media and the growing social media, special packaging of news reports and features on socio economic and political events in Nigeria, across Africa and the rest of the world. Contact: [email protected]tng.com
Contact us: [email protected]
FOLLOW US
© Copyright © 2020 | Developed byDominion Web
MORE STORIES

Bobrisky blasts troll who said he can’t wait to see him...